Why I'm looking at tape again for storage 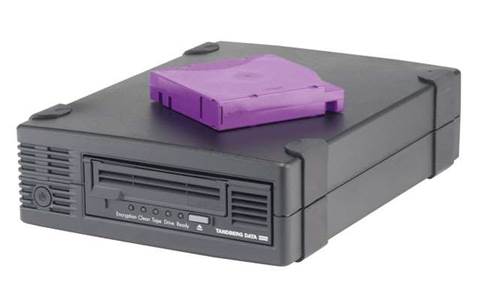 Jon Honeyball discovers that tape is still the medium of choice for mass storage needs.

I decided that we needed a tape backup. This was no small step, since I’d managed to convince myself for a decade that digital tape was the root of all evil. Ten years ago, I had an HP DAT drive, and the kindest thing I could say about it was that DAT stood for “dies after two years”, which it did. Then, its replacement had huge problems reading the tapes I’d so carefully created. This wasn’t an issue only with HP’s drives – DAT itself was at fault – and I know that I wasn’t merely unlucky, since a number of my clients had similar problems. So the whole affair left a sour taste in the mouth.
Since then, I’ve been relying on multiple hard disk backups for my important data. This can be messy, since there’s always a temptation to create \wednesdaybackup\
mystuff and then next week create \tuesday, which contains \wednesdaybackup\mystuff. Eventually, you feel like Alice peering down the rabbit hole as you acquire endless copies of copies of data splattered across disks in various subdirectories. Sorting this out can take days.
It’s worse still when you decide to replace an old PC and take a copy of all its drives, “in case there’s something important”. This means you end up with \oldmacbookprobackup, which also contains its own mess of \tuesdaybackups and so forth, except that now you’ve copied the mess onto your shiny new computer (or stuffed it onto a RAID array connected to a server). The only saving grace of such a huge data mess is that drive indexing now enables you to find things quickly, but this isn’t really a good enough solution. Sure, it will list all 37 copies of \thatmissingfile.doc, but are they all good?
Newsletter Signup