Why Apple's next operating systems are already making users sick 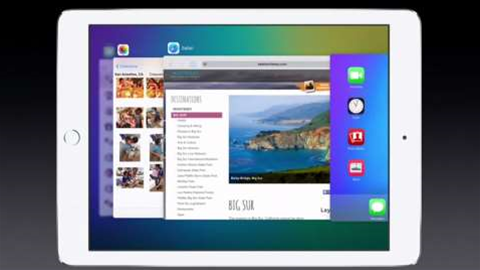 Apple is rightly championed for its accessibility efforts. More than its rivals, Apple has embraced the notion that everyone should be able to use its products; OS X and iOS alike have extensive options for assisting people with impaired vision, hearing and motor control.

But Apple has largely glossed over a key area of accessibility that's of increasing concern: vestibular disorders. While this encompasses a range of conditions and symptoms, broadly speaking, those affected suffer adverse reactions — dizziness, vertigo, panic attacks — to animation that's prevalent throughout modern operating systems.

When Apple released iOS 7, this came to a head. Zoom, parallax and sliding effects made the system unusable for those affected. It was a month before a “Reduce Motion” setting could be enabled to block parallax and zoom effects, and a further five months until the iOS App Switcher's lurching entry/exit animation was nerfed. Today, iOS and OS X upgrades are imminent, and yet current betas worryingly position the systems to make users sick all over again.

My head is spinning

Vestibular conditions are “invisible”, but according to accessibility and UX consultant Greg Tarnoff, they can be far from trivial: “When things are small and isolated — say, taking up a quarter of my vision — that usually isn't a problem. But when there are multiple levels of motion across a larger area, things quickly turn.”

Greg's particular vestibular disorder has been called Chronic Subjective Dizziness. “The short of it is that my brain receives data, but it can't process it — it's like a compiler in my head is expecting one language, but getting another,” he explains. When triggered, this results in his surroundings starting to spin, panic attacks, and the feeling of strength leaving his body, making him prone to falls. “It's as if my brain has used up all available resources, and nothing else works,” he continues, “and depending on the severity of the trigger, attacks last between 30 seconds and five minutes”. 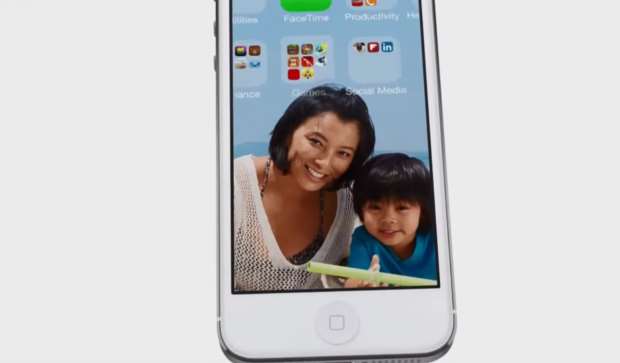 Greg isn't alone, and other affected parties spoke of additional symptoms, including stomachaches and headaches, with post-trigger problems sometimes lasting for days. The question is what you can do, bar attempting to shut your eyes during every onscreen transition.

Technology writer Kirk McElhearn — who has some balance issues, slightly impaired eyesight, and finds excessive motion disturbing — naturally immediately heads towards existing beneficial accessibility controls: “In iOS, that's Reduce Motion, as well as Increase Contrast | Darken Colors. In OS X, it's all the translucency features; it's harder to read text when the background is blurry.”

Greg also finds Reduce Motion useful, although notes it rarely extends to third-party apps: “Scrolling through social-media apps can trigger attacks, primarily when I come to an auto-playing video or GIF with motion going in a different direction to the scroll.” On the Mac, he avoids the Dock, disables “genie effects”, and closes his eyes while using Mission Control. Mostly, he tries to work using a laptop and two extra displays, to entirely avoid using Spaces and switching between apps. 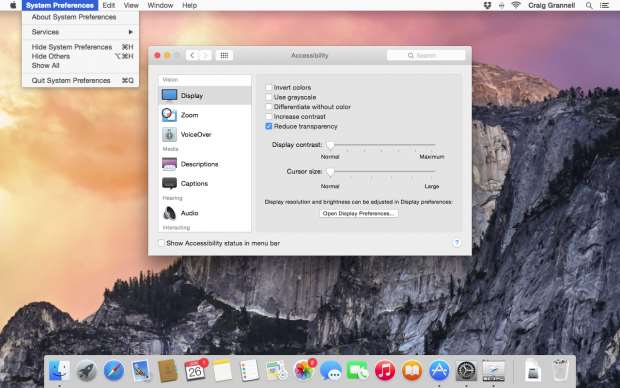 The problem is that while Apple offers the aforementioned settings, none go far enough. More worryingly, the company in one case appears to be going backwards. The iOS 9 app switcher unveiled during Apple's June event has a more aggressive trigger than its predecessor, and doesn't yet respond to Reduce Motion in the current beta. In addition, although OS X is about to receive its fourth major update since extensive animations were introduced in OS X Lion, accessibility controls for vestibular disorders remain absent.

One concern among accessibility advocates is that the term “accessibility”, in the context of computing, is starting to become synonymous primarily with helping the visually impaired, rather than opening up devices and software to everyone. “Accessibility often gets over-simplified, because it's so complex, and so designers must be made aware that it can mean many things. There's no single definition of accessibility or one type of disability,” affirms designer, animation and UX expert Val Head, who adds that talking about motion, balance and vertigo issues “helps make app creators more aware of the issue” and may “encourage more change at the OS level”.

Greg is quick to state that he “loves that accessibility is gaining headway in the tech and design industries, and that we're seeing more articles about it and getting more people involved,” but he has similar concerns that “it's often relegated to whether something works with a screen reader”. Echoing Val, he argues that accessibility “means so much more than that,” and the main areas of consideration should include vision, hearing, physical, learning, and neuro-diversity variances. “Folks with neuro-diversity issues, such as vestibular disorders, make up a surprisingly large proportion of the public. According to Veda, as many as 35% of people aged 40 and above have experienced some sort of vestibular disorder, either chronic or temporary,” he says. “Making products that alienate a third of your audience is bad form in any market!” 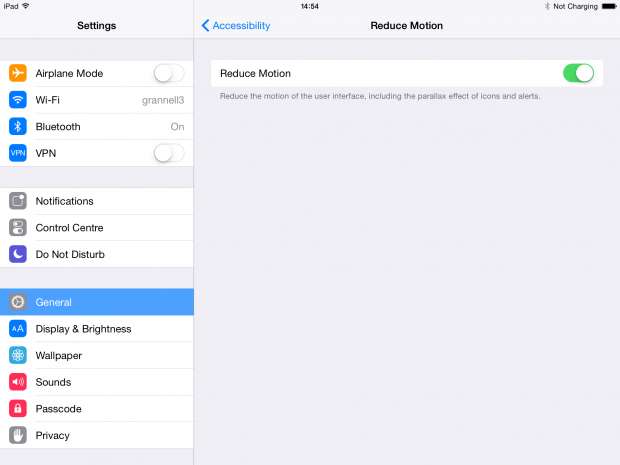 The question is where we go next, and the consensus appears to be Apple must — as it has in other areas of accessibility — take the lead, encouraging developers to follow. Kirk would like Apple to offer “a master setting to turn off all the visual fluff that looks good in product demos, but is nothing but a hindrance to many users,” and make the facility prominent rather than burying it deep in the Accessibility settings.

Val reckons finer-grained controls for iOS would be useful, too, rather than forcing someone to turn off all animations when only some may be triggers. “And something similar on OS X should be in the works,” she adds. “Larger screens amplify the effects of motion on those with vestibular disorders, and so not including controls there is a huge oversight.”

Greg simply argues that while Apple has “pushed the accessibility front with features such as VoiceOver, it's time to give users more control of their experience: “Some folks need to read light text on dark backgrounds, so accommodate that. And for those of us with issues related to motion sickness, let us set how much motion we use.” 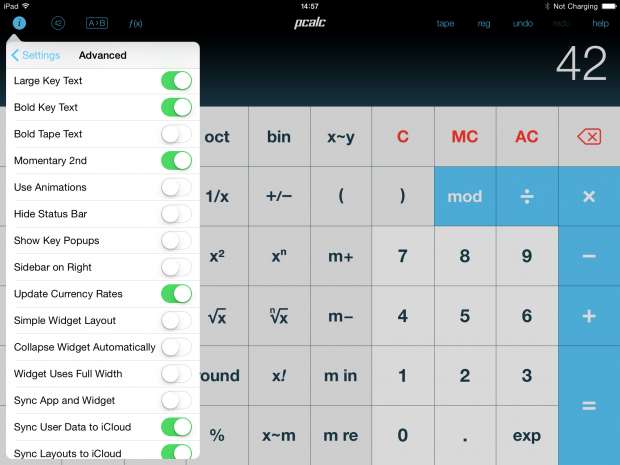 Third-party developers should also be more mindful of these problems, argues Kirk: “Most think of accessibility as a solution for people who can't see or hear, but it's much more than that. Too many people are unaware of the problems associated with excessive onscreen motion, because they simply don't suffer such problems.” Val counters that “creating animated interfaces is still new territory,” but agrees this doesn't excuse designers and developers, adding that increased awareness of both upsides and downsides should help better decisions be made regarding where and how to add motion.

James Thomson is a developer who recently added a setting to disable transitions in his calculator app, PCalc. Although he considers himself fortunate in not having to rely on accessibility features, “millions do, and anything that can be done to help more people use our apps and devices is worth it”.

He suggests fancy graphical effects that have no actual purpose should be made optional: “It's not difficult to do — replacing a full-screen swipe with a simple fade, for example. You just need to think about this during development and not tack it on at the end.” But James wonders how many developers consider accessibility at all, and suggests everyone in the industry needs to do better and recruit more diverse testers who will pick up those things development teams may miss.

As for Apple, he sees no obvious technical reason for Reduce Motion, at the very least, becoming a part of OS X El Capitan: “Apple has already recognised on iOS that this feature has a benefit, and so I assume it's a question of prioritising development time. But very small changes make a big difference to some people.” He ends by saying that with both upcoming system updates, it's still early enough to get changes in before final versions are shipped: “So the best thing people can do is log bugs against the features in question.”

I have read and accept the privacy policy and terms and conditions and by submitting my email address I agree to receive the Business IT newsletter and receive special offers on behalf of Business IT, nextmedia and its valued partners. We will not share your details with third parties.
Copyright © Alphr, Dennis Publishing
Tags:
accessibility accessibility features apple greg tarnoff panic attacks software vestibular disorders
By a Staff Writer
Jul 1 2015
2:35PM