Why all businesses should have email put down, and learn to love Slack

Email is stuffy, convoluted and inefficient. It's time to put it out of its misery

Everyone hates email. You may remember a time 20 years ago when getting an email was an enjoyable novelty, but boy didn't that get old fast?

Yet here it is, decades since its inception having barely changed or moved with the times. Nobody likes it: it's time-consuming, relentless and inefficient, not even touching upon all the stuffy artificial conventions we've built up around it over time. How many people you've never met have hoped you're well so far this week? It's almost designed to cause logjams and to build up to anxiety-inducing levels.

There's a reason that everyone was excited when Google announced it was killing email with Google Wave. That didn't pan out so well, but everyone was quietly aware that email wasn't immortal, even if the mighty Google could barely inflict a flesh wound.

Step forward Slack. I appreciate this sounds like an advertorial, but it's genuinely not. I hadn't heard of it before I joined Alphr just over a month ago, but email just has no traction here for internal communication and it's all the better for it.

What is it? In short, it's a messaging tool. You can create as many channels as you like for you and your colleagues to chat on on different topics – we have a number marked for everything from reviews to off-topic. You can also directly message anyone you need to nudge privately without bringing it to everyone else's attention.

We even have it plugged into social media channels, so we see every tweet that goes out and everyone who replies to them. It works really well.

It's hard to pinpoint exactly why it works so well – and better than, say, opening up your own IRC channel for that retro vibe, but everything is both nicely basic and well optimised. 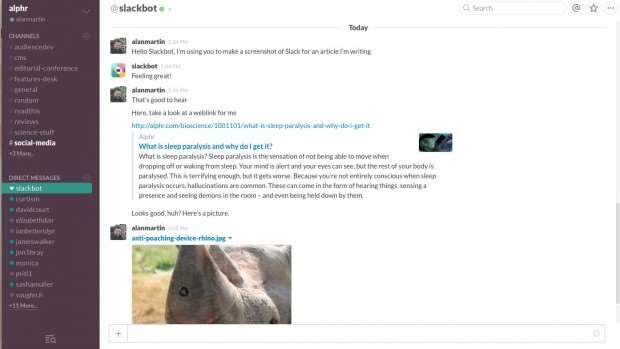 It brings together your team collaboratively so everyone is always aware of what's going on, but can step away if they need to focus, without letting messages build up, email-style. You don't miss anything important, as you get notifications when you're mentioned, or when someone directly messages you – even on mobile should something really urgent come up.

And for me personally, as someone who has a tendency to write long emails, this focuses the mind brilliantly to just Get. To. The. Damned. Point. Just as Twitter taught us all to stop being so damned verbose on social media, Slack keeps us tight and succinct for business, without any of the long, drawn-out conventions that have grown up to suffocate email.

We still use email. Of course we do – nobody would be able to get in touch with us otherwise, and the outside world hasn't completely abandoned it yet. But when I do, and I have to expose myself to the old ways of doing things, a little part of me just wishes I could send a quick Slack message instead.

It's not just us who use it, which is just as well as we still fit into the “small team” category. Slack lists Adobe, BuzzFeed, eBay, NASA and The Wall Street Journal among its clients. One or two of them could be wrong, but all of them?

Give it a try. It's free for small teams. If we can persuade one reader to let go of email, we'll have done our bit.

I have read and accept the privacy policy and terms and conditions and by submitting my email address I agree to receive the Business IT newsletter and receive special offers on behalf of Business IT, nextmedia and its valued partners. We will not share your details with third parties.
Copyright © Alphr, Dennis Publishing
Tags:
By a Staff Writer
Jul 22 2015
3:09PM