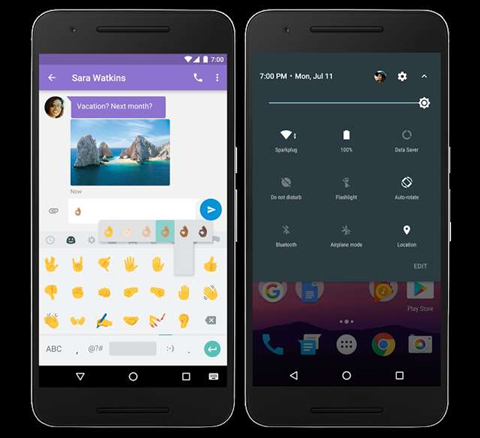 Google has started rolling out the latest version of its operating system for smartphones and tablets, Android 7.0 Nougat.

The first devices to receive the upgrade will be the Nexus 6, 5X, 6P, 9, Nexus Player, Pixel C and Android One, with LG’s upcoming V20 smartphone set to be the first device with the new software preinstalled.

The new split-screen feature can be activated by holding down on the square recent apps button, which will bring up a menu of recently used apps and then tapping on one of the options.

If a particular app doesn’t appear in the menu, you can tap home (the circle button) and choose it from the home screen or app draw.

A new quick settings menu allows fast access to settings such as Wi-Fi, Bluetooth, aeroplane mode and flashlight, while users can now respond directly to a notification without having to open an app.

Under the hood, Android features improved file-based encryption allowing better isolation for devices that have more than one user, along with the ability to install software updates in the background.

A low-power usage mode called Doze is activated when a device is not in use, which Google claims will lead to better battery life.

For games and graphics-intensive apps, Google has introduced a new application programming interface (API) called Vulkan which it claims will improve performance, and the operating system will also support Google’s Daydream platform for virtual reality apps.

There is also an increase in the number of emoji available in Android, with 1500 included in 7.0 Nougat.

As with previous releases, the version name 7.0 Nougat continues tradition of labelling each major upgrade of Android alphabetically and, in turn, given each of them a confectionary-themed codename beginning with that letter.