What are some of the cheapest Windows tablets in Australia? 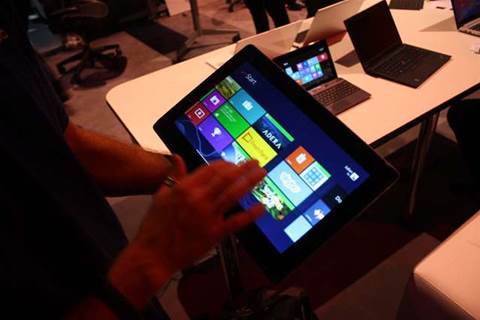 If you rely on specific Windows applications for work which you can't replicate on other devices, then a Windows device might be a better option than Android or Apple.
The Android-powered Nexus 7 2 tablet packs a punch at $299, but for a few dollars more you'll discover a few entry-level Windows 8 tablets:
Newsletter Signup

I have read and accept the privacy policy and terms and conditions and by submitting my email address I agree to receive the Business IT newsletter and receive special offers on behalf of Business IT, nextmedia and its valued partners. We will not share your details with third parties.
These Windows 8 tablets run a full version of Windows, not the stripped-down Windows RT. It's worth noting that they're built around Intel Atom processors designed to focus more on battery life than performance, so they're not exactly multitasking powerhouses. The 10-inch Asus VIVO 10 is the standout here, offering 1366x768 resolution but curbing the battery life to around 7 hours – still better than most budget Windows notebooks. The others are 8-inch tablets limited to 1280x800 resolution, which might not suit some people, but in return they extend the battery life out towards 10 hours.
With Android undercutting Windows tablets and Chromebooks currently undercutting Windows netbooks, Microsoft are reportedly considering slashing the Windows 8.1 licensing fee for entry-level Windows devices. Expected to knock at least $50 off the price, it would help many more Windows tablets and notebooks sneak under the $400 mark to compete head to head with the competition.
If you shop around today you'll find a handful of Windows 8 notebooks for less than $400, offering a bigger screen and sharper resolution than tablets, along with a built-in keyboard. The trade-off is that they're a lot heavier on your shoulder, plus you'll possibly need to lug around a power supply because they'll struggle to match the battery life of an Atom-powered tablet. You don't have to look far for a bargain, with 10.1-inch Windows 8 notebooks including;
These 10.1-inch, 1GHz AMD-powered netbooks are about as cheap as they come these days unless you dig through the clearance bin, where you might get down closer to $350 for a discontinued Intel Celeron or Pentium netbook. If you need a little extra screen real estate you'll even find a few 11.6-inch Windows notebooks which sneak in under the $400 mark, such as;
These 10.1-inch and 11.6-inch Windows netbooks are obviously very short on grunt and sacrifice a lot of screen real estate compared to larger notebooks, but you don't really miss out on too many features. For example HP's 10-E004AU still offers HDMI, Ethernet, SD and USB3.0 ports along with 802.11b/g/n wi-fi and a webcam. With only a dual-core 1GHz powerplant you should obviously set your sights low in terms of performance. As you'd expect, you get what you pay for.
Once you're looking at hybrid windows devices, which convert between notebooks and tablets, the price naturally jumps. Unfortunately the Australia tax really bites in this space as vendors price gouge and it's easy to spend more than $1000. You might simply consider a Windows tablet with an external wireless keyboard, but if you're on a budget yet your heart is set on something with a detachable or hide away keyboard then consider:
ASUS Transformer Book T100 ($548 at Officeworks)
The T100 is one of the first convertible Windows 8.1 tablets to sport the new generation of "Bay Trail" quad-core Intel Atom processors, which which deliver a performance boost while keeping down the price tag. If we see the rumoured drop in Windows 8.1 licensing fees, this year could produce a bumper crop of budget Windows devices designed to give the competition a run for their money.
Copyright © BIT (Business IT). All rights reserved.
Tags:
hardware tablets windows
By Adam Turner
Feb 26 2014
3:32PM