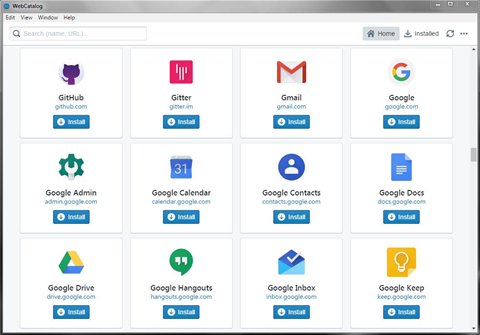 Keep your favourite web services organised and make them easily accessible from your desktop with this free tool.

Most of us increasingly rely on cloud apps for our personal and business productivity, but keeping all those apps organised and easily accessible in your browser can be problematic.

WebCatalog solves this problem by allowing you to run a wide range of web apps and sites as native desktop applications.

Launch WebCatalog and it displays large icons for each supported site and service. All you have to do is hit the “Install” button for whatever you need.

There’s no complexity to the setup. You don’t have to download any bulky executables, point WebCatalog to folders or anything else. Simply wait a few seconds and WebCatalog adds the app to your Installed list, ready for use.

Launching an app displays its regular web interface in a Chromium instance. There’s a simple menu bar and keyboard shortcuts to cover the basics (Back, Next, Reload, Zoom), but otherwise all the usual browser interface clutter has been stripped away.

While the app works as it did before, running via WebCatalog makes it feel more like a native application.

Every app appears separately on your taskbar or dock, for instance, along with an appropriate icon (though oddly pixelated on our system).

You’ll get native desktop notifications when something important happens, like a new call or message. And WebCatalog adds each installed app to your Start menu for easier access later.

WebCatalog is also relatively lightweight. Sure, every app requires its own instance of Chromium, but these only grabbed around 48MB RAM on our test PC (minimum private working set), and if you ran these in a regular browser tab you’d see something similar anyway.

Put it all together and although WebCatalog isn’t going to change your life, getting app taskbar buttons and native desktop notifications might justify the download. It’s also very easy to use and safe to try, with no signup or other marketing hassles.

Being open source, WebCatalog is free and it’s available for 64-bit Windows 7 or later, macOS 10.9 or later, and 64-bit, Debian-based Linux.