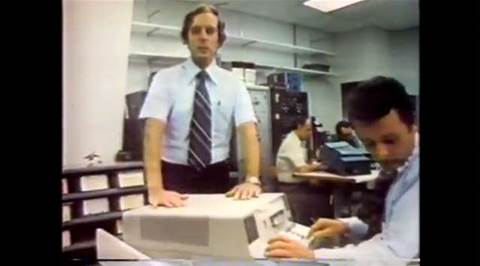 It's so light, it's only 50 pounds! This video for a small portable computer makes us wonder what 1977 would have made of the iPad.

Watching this video below we can't help but wonder two things:

The advertisement is purportedly from 1977, a time in history when a computer weighing "about 50 pounds" was seen as a positive thing.

The computer is the IBM 5100 Portable Computer and is now something of poster child for how far laptop technology has come. It used magnetic tapes, had up to 64K of memory, and that tiny screen is actually a CRT, not an LCD. The dimensions of the on/off switch alone are probably bigger than some laptops today.

It's interesting to note what the advertiser thought was important: things like the ability to take it anywhere, perform complex calculations, the price and being easy to learn.

That's before we even get to the tablet computer. What would we have made of the tablet in 1977?