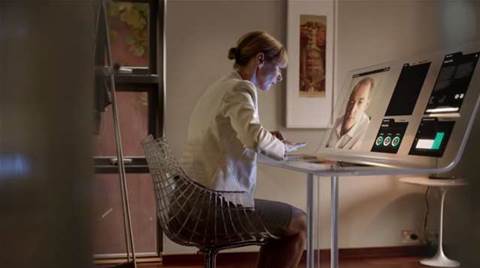 From virtual waiting rooms to machines that talk to each other, we wouldn't be surprised if several of the things in this video are commonplace at some point

We know Telstra is only imagining the future in this video below, not telling us this is how things will be - but still, we figure there is no harm in thinking about whether any of this stuff will be possible.

The voiceover is overly-earnest and it seems like no-one ever has to fiddle with technology that isn't doing what it's supposed to - but if you can ignore the fluff, what does Telstra's vision look like?

Machines will talk to each other

They do now, but we'd argue not perfectly. Say you run a shop or warehouse. There are all sorts of systems you can buy to track how much stock you have left on the shelf or in the storeroom. Some of these systems already talk to your accounting system, so those changes appear on your books.

The video alludes to the next step, where even more systems are tracked, without you needing to count things yourself.

Chances of this happening? High, in our view. Take this article, which refers to the idea that trucks will know when they need maintenance, or "the vending machine guy only goes to the vending machine when it's empty". A company has even developed a monitoring system for bars that automatically knows how many drinks have been served by literally recording the pouring of bottles.

Teleconferencing
You can do this now. But having the sort of high quality, big-screen experience you see in the video above? Up till now that has usually been something you are more likely to find in corporate offices - video conferencing company Avaya estimates it has around 36,000 video-enabled boardrooms in Australia, according to an article in publication The Buzz (disclaimer: The Buzz is owned by Brennan IT and produced by Haymarket Media, which also publishes this site). Companies are trying to push this technology into more areas - Polycom is talking up the idea of "hundreds of millions of people" communicating this way using its RealPresence CloudAXIS technology. Whether small businesses are content to stick with Skype calls, as we know some do, we'll wait and see. Until the NBN reaches the majority of Australia, we have doubts.

"Work and life will be truly balanced"
That's the words of the Telstra video voiceover, not our words. Here at BIT we can see plenty of ways technology can help save you time - for some companies, being able to have staff use cloud accounting software on their laptops while out of the office, could save hours of time spent  inputting data over a period of months. Still, we don't kid ourselves that technology solves everything. You still have to sacrifice time with your family, or time working on your business.

Multi-screen computers
We have that now.

Minority-Report style computer control
There's something about holding out your arms and grabbing and swiping at thin air to control what happens on your computer screen that captivates technology companies. Is it really convenient? Probably not for a lot of the things you need to get done at work. By the way, the technology for this exists. Microsoft's Xbox Kinect is probably the most well-known example in the home, but for getting work done there are products emerging like SpaceTop and Leap Motion.

Virtual waiting rooms
This has potential. The idea is the client doesn't visit your office, they talk to you online. Technology companies have been suggesting that this is the future for years - we saw a video Cisco created demonstrating "home telepresence" a few years ago. They imagined one day there might be a directory your customers can call up, from home, where you click to talk to everyone from "chefs and yoga teachers, to travel consultants to financial advisors." As you might imagine, better broadband will be fairly important if this is going to be close to becoming a reality.

Try and buy, on screen
The video above shows a woman swiping a display to see an image of what she'd look like wearing different dresses without trying them on. This has been experimented with in real life. In our view the key would be the ability to let your customers do this online, without needing to visit your shop. We could see a company like Shoes of Prey trying this. Still, it wouldn't help with the fit, though.

Final thoughts
We wouldn't be surprised if several of the things above are commonplace at some point. It's interesting to see how many rely on high quality broadband services though. The tablet computers and big screens exist now, but not everyone has a fast enough connection.