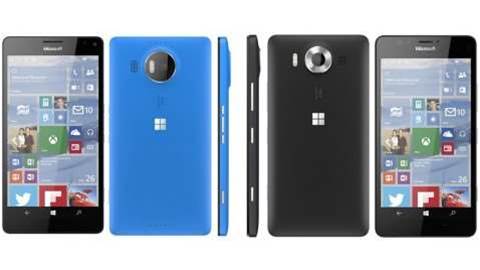 Renders of Microsoft's new flagship devices have hit the internet

Microsoft is due to officially launch its new Lumia devices at a hardware event in October, but you don't have to wait until then to catch sight of the Windows 10 smartphones.

Renders for Microsoft's latest brood have landed on the internet. Posted by Evan Blass (@evleaks) on Twitter, the images allegedly show the cyan-coloured Cityman (Lumia 950 XL) and the black-coloured Talkman (Lumia 950), the former with a 5.7in screen and the latter with a 5.2in screen.

The images show onscreen buttons, bulbous rear lenses and a minimalist Windows logo printed on the back. In terms of specs, leaked information collected by Windows Central point to the phones featuring 3GB of RAM, 32GB of internal storage expandable via a microSD slot, a 20-megapixel rear camera and a 5-megapixel front camera. The Talkman is set to be getting a Snapdragon 808 processor and a 3,000mAh removable battery, while the Cityman will get a Snapdragon 810 processor and a 3,300mAh battery.

Microsoft will want these phones to showcase Windows 10 Mobile at its very best, and these specs suggest that the Lumia 950 and Lumia 950 XL will do exactly that. A microSD slot alongside 32GB of internal storage is very welcome, and the rest is on par with other high-end devices. Ultimately, though, what will matter is how well it works with the software, and how good the OS actually is.

.@bdsams I see your Cityman, and raise you a Talkman (top to bottom) pic.twitter.com/u9rACR4CeX

These aren't the first images of the new Lumia phones to be leaked. At the beginning of August, shots of a Windows 10 Lumia found their way online through a WPXAP forum, showing a USB Type-C port in place on the device. In those pictures the new Lumia was seen to run a Windows 10 Mobile Insider build.

Evan Blass tweeted his pictures in response to an image of the Cityman posted by Brad Sams (@bdsams). In the picture the phone is purportedly connected to an accessory that allows it to support Microsoft's Continuum – a new feature that turns Windows 10 phones into miniature PCs.

What do you make of the renders? Do the new Lumia's whet your appetite at the prospect of a Window's phone, or do you find it hard to get worked up by pictures of expensive rectangles? In either case, we'll have more information on the Lumia Talkman and Cityman when details about price and release date emerge.

I have read and accept the privacy policy and terms and conditions and by submitting my email address I agree to receive the Business IT newsletter and receive special offers on behalf of Business IT, nextmedia and its valued partners. We will not share your details with third parties.
Copyright © Alphr, Dennis Publishing
Tags:
hardware
By a Staff Writer
Aug 28 2015
2:17PM