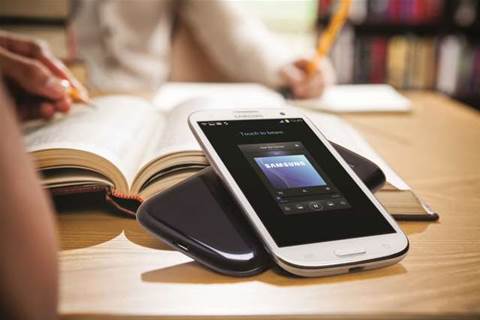 If you're on the road without a wireless modem, using your phone as a hotspot is a handy way of getting work done online. We've been trying this with the new Samsung Galaxy S III.

Ever since mobile phones have been able to connect to the Internet, people have looked for ways to connect their computers to their phones. This used to be done with cables although these days we can use wireless technologies like WiFi and Bluetooth to connect our smartphones to computers and tablets. This is called tethering although Apple calls this capability "Personal Hotspot".

We've been testing the Samsung Galaxy S III, whch is generating quite a bit of attention since it went on sale last week. So how easy is tethering to use with this phone?

The Galaxy S III supports tethering either by USB cable to a computer or Bluetooth or WiFi to computers and tablets.

Each different connection method has its own limitations. USB and Bluetooth only allow the Galaxy S III to connect to one other device. WiFi tethering allows up to ten other devices to connect to the Internet via the S III.

The tethering feature works well with the Galaxy S III. We used it to connect a laptop and tablet to the Internet. Our only criticism of the Galaxy S III's tethering feature is that it's not easily accessed. While most other commonly used features are found on a shortcut bar that's accessed by dragging your finger down from the top edge of the screen, tethering is buried under Settings | Wireless and Networks | More Settings | Tethering and portable hotspot.

The benefit of using the S III, or any smartphone that allows tethering, is that it negates the need to buy a USB modem or other 3G device for Internet access. With mobile data plans on smartphones now offering decent data allowances, you can reduce the number of different services you need from your telco.