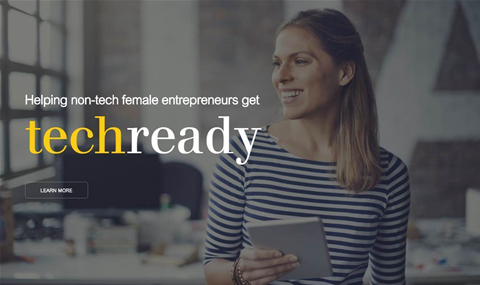 Time is running out to apply for two programs for female entrepreneurs: E3 (Empower, Evolve, Escalate), which closes on 10 September, and the Tech Ready Program, which is limited to 20 participants.

With the first intake to the Tech Ready Program accelerator now graduated, applications are now open for the second round of the Sydney-based program, which starts on 25 September.

Founder Christie Whitehill said she founded the Tech Ready Program because in many cases the issue is not that women do not want to get involved in tech, rather they don't know where to start, have had a bad experience or are lacking self confidence because tech is such a male dominated field.

The proportion of female tech founders has plateaued at around 17 percent, she observed. So having launched two technology businesses, she decided to do something about it.

“As a non-tech founder, with no guidance, I made a number of 'wrong turns' that resulted in the loss of tens of thousands of dollars in development costs and third party consultancy fees,” Christie said. “With Tech Ready Women I am on a mission to accelerate the rate of women entering the tech space ensuring that they are equipped with the skills, education and sense of community they need to empower their journey.”

“Women in technology face an undeniable uphill battle and it's not because of a 'biological' condition. Having just successfully finished our first Tech Ready Program, I have seen that mentoring can make it possible for non-tech women to confidently become founders of tech startups that are on the path of success. Women want to be involved in tech, but we need to do more to support them throughout the journey, whether it's through helping them refine the initial idea so it is viable, connecting them with the right app development team, educating them on business principles, showing them how to develop a prototype, or showing them what's required to successfully pitch for investment.”

Tech Ready Program graduate Megan Gale wanted to take her side business (aupairtribe, which matches au pairs and host families) to the next level.

“I have years of experience in management roles but I realised that I needed a different skill set,” Gale said. “Being part of the Tech Ready Program was particularly useful for validating my idea, engaging the best developer and understanding how a tech business is built. I am now also part of a broader community that I can tap into at any time, something I wouldn't have been able to do so easily on my own.”

Participants receive $10,000 worth of hosting and services from Amazon Web Services, an account with Github and Legal Vision, discounted desk space at Tank Stream Labs and access to its meeting rooms, as well as ongoing support from experts.

Meanwhile, SBE Australia has announced it will run E3 in Melbourne starting in October, following the success of the program for female tech founders in Sydney.

The eight-week E3 program is designed to equip and empower female founders with the skills and confidence they need to build sustainable, high-growth, investor-ready technology businesses, according to SBE Australia. Participants use and learn new tools and put into action techniques used by entrepreneurs to better understand customers, test business models, lead teams, build a brand and manage growth and risk.

“Just four weeks into the [Sydney] program, the founders are making strong progress with their businesses, which is why SBE Australia is so thrilled to be expanding its sphere of influence and bringing E3 to Melbourne,” said SBE Australia general manager Julie Demsey.

“In light of the positive reception we have received only a few months since E3's official launch, we are also preparing to do a roll-out of the program in other markets, such as Brisbane and Perth, in 2018.”

As a bonus, participants receive $US10,000 Activate startup credits that are valid for two years.

Startup Victoria CEO Georgia Beattie, who participated in the Springboard Enterprises Australia Accelerator program, said: “Female founders aren't thinking big enough, they see what is within reach instead of setting big, audacious goals for themselves.

“I want to see more of the latter! Build up your girl-gang community, surround yourself with like-minded founders and utilise different mentors that bring unique connections, networks and skill-sets to the table.”