Two of Dell's Venue tablets will go on sale in Australia 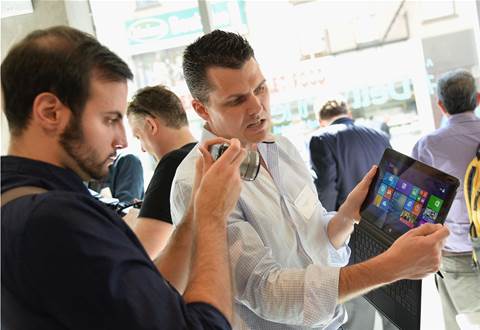 Looking for a tablet from a familiar name? Find out more about the two new Dell Venue tablets going on sale here in November.

Two of the four Dell Venue tablets announced this week will be sold in Australia, a Dell press release has confirmed.
The Dell Venue 8 Pro and Venue 11 Pro will go on sale in Australia in November, though prices are yet to be announced.
Newsletter Signup

I have read and accept the privacy policy and terms and conditions and by submitting my email address I agree to receive the Business IT newsletter and receive special offers on behalf of Business IT, nextmedia and its valued partners. We will not share your details with third parties.
The new Dell tablets will part of what we expect will be a flood of new tablets, notebooks and computers when Windows 8.1 ships on October 18. So don't be in too much of a hurry to decide what to buy. Don't forget, Microsoft also recently revealed the Surface 2 and Surface Pro 2.
Overseas, Dell has announced two new Venue tablets running Android and two running Windows 8.1. Let's take a look:
Venue 7
The baby of the range will sell for US$149.99. Cheaper off-brand 7in tablets aren't hard to find, but it seems that Dell hasn't skimped on the quality of the screen and other components. Specifications include 16GB of storage, a micro-SD slot supporting cards up to 32GB, Wi-Fi (b/g/n), Bluetooth, front and rear cameras, and access to Google Play for apps and content.
Venue 8
Priced at US$179.99, the Venue 8 is the 7's slightly larger sibling. The specs are generally similar apart from the 8 being slightly larger and heavier thanks to the 8in screen. The Venue 7 and 8 both run the Jellybean version of Android.
Venue 8 Pro
The entry-level member of Dell's Windows 8 (it will ship with 8.1) tablet range, the Venue 8 Pro costs US$299.99. It is powered by an Intel quad-core 'Bay Trail' processor rather than the less powerful 'Clover Trail' chips used in the 7 and 8. Other specifications are also boosted - the touchscreen can handle ten points of contact, storage starts at 32GB, micro-SD cards up to 64GB are accepted, the cameras are higher resolution, and Wi-Fi performance should be improved thanks to the use of dual antennas and radios. A keyboard is an optional extra.
Venue 11 Pro
While the US$499.99 Venue 11 Pro is a tablet, an optional attachable keyboard means it can also be used as a notebook. The base model comes with the Bay Trail processor, but it can be optioned up with a selection of Core i3 and 15 processors if more performance is needed - which may be the case if you're planning to run software designed for desktops and notebooks. Storage options range from 32GB to 256GB, plus up to 64GB of micro-SD memory. Dual-band Wi-Fi can be helpful in locations where the normal 2.4GHz band is crowded.
Our advice?
Smaller tablets can be useful for some tasks - their screens are bigger than so-called "phablets" - but the larger size and full HD resolution of the Venue 11 Pro and its ilk may provide a better experience when using programs that were not specifically designed for small displays.
So the age-old advice applies: think about what you intend to do with your new business tablet before picking a particular model.
Copyright © BIT (Business IT). All rights reserved.
Tags:
australia dell hardware tablets venue
By Daniel James
Oct 4 2013
12:04PM