Turbo-charge search on Windows for free 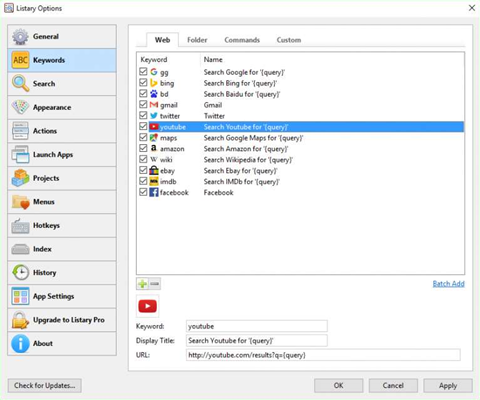 Sure Windows has a built-in search tool, but it’s not like Listary – a free tool that transforms Windows Explorer, making it easy to rapidly find and launch files or programs anywhere on your system. And now, Listary can also search the web.

That’s just one of a huge list of new features in the latest version, Listary 5.0. Other additions include a smarter launcher that’s able to launch Windows 8 and 10 apps, and run desktop applications as an administrator.

Handy new keyboard shortcuts include pressing Ctrl twice to launch or hide Listary, Ctrl+Enter to open the parent folder of a search result, Alt+O to access “Open With”, and setting hotkeys to launch actions directly.

There are all kinds of integration improvements, from sending search results using the Windows “Send to” menu, to environment variable support, the new support for SpeedCommander, XYPlorer Free and One Commander, and optimisations for Total Commander, AutoCAD, Directory Opus and more.

And the list goes on, with so many other additions that they’d make a perfectly good update all on their own: custom actions, a redesigned interface with Theme support, keyword support to open your favourite folders, a new mkdir command to create a new folder, a “batch add” for websites, folders and custom commands, {query} support in paths, and more.

Fortunately, two things haven’t changed: Listary still runs on Windows XP and later, and it remains free for personal use.