This will affect photographers, designers, video editors who pay for Adobe software 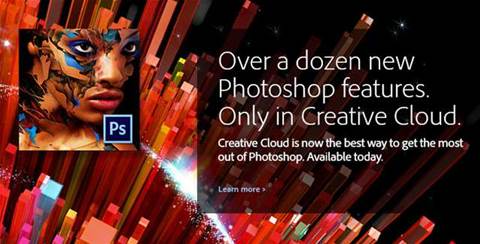 You might now be hearing noise about the “Creative Cloud” which Adobe announced overnight. So what's it all about?

If you’re a video editor or photographer then more than likely that you are using Adobe software, such as Photoshop, Premier Pro or After Effects.

You might now be hearing some noise about the “Creative Cloud” product that Adobe announced overnight.

So what is Creative Cloud exactly and is it worth your while to make the jump?
The “Creative Cloud” is a subscription-based service that gives you access to the full suite of Adobe software for as long as you continue to pay the monthly fee.

This is not new - Photoshop and other Adobe products have been available this way for a while.

What is new is that from here on in, Adobe won't also be selling these products as one-time only purchases. New versions will be by Creative Cloud only. In other words, you'll have to pay-by-the-month.

There is an exception: you will be able to keep buying licenses for "all CS6 products via electronic download from adobe.com and participating resellers", according to a press release from Adobe. For how long we don't know.

Price
Here is a link to the Creative Cloud pricing plans.

Something to be aware of: Under the $49.99 plan, you have to commit to pay for a year and exit fees will apply if you decide to end the subscription before the year is out.

There are also plans for teams of workers, which give you 100GB of online storage per user instead of 20GB and centralised billing and support calls, for $69.99 per month per user. This gives you access to all the Adobe products.

When you consider that buying the entire creative suite outright would normally set you back close to $4,000, or a little over a $1,000 for individual applications such as Photoshop or Premier Pro, there could be a significant cost saving for some people by switching to Adobe’s Creative Cloud subscription service.

Creative Cloud subscribers get access to the latest version of the software (as and when they are released) included as a part of their monthly fee.

It’s worth noting that you don’t need ongoing Internet access to run the software as it is installed directly to your computer, just the same as if you bought the software outright. However, Adobe does require online software license validation every 30 days.