This Telstra modem is the new top dog 4G hotspot 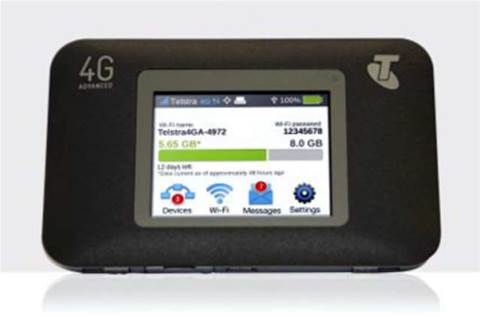 If you're looking for the best possible mobile broadband connection for your laptop or tablet, we recommend keeping an eye out for Telstra's new Wi-Fi 4G Advanced hotspot.

We highly recommend 4G if you're choosing a phone or a wireless broadband plan. It is extremely useful if you rely on a fast mobile broadband connection to get your job done.

So it's with interest we note that Telstra will have a new hotspot modem tomorrow, the Wi-Fi 4G Advanced, which Telstra claims can share a 4G connection with up to ten devices for 10 hours before the battery needs charging.

That's not bad, if it really does last for 10 hours - we got four hours in use from this mobile hotpost modem last year.

We note that this isn't the first Wi-Fi hotspot modem that's advertised as being capable of sharing an Internet connection with up to 10 devices - it's a selling point of the red iiNet MobiiHotspot 4G.

I have read and accept the privacy policy and terms and conditions and by submitting my email address I agree to receive the Business IT newsletter and receive special offers on behalf of Business IT, nextmedia and its valued partners. We will not share your details with third parties.
The new Telstra modem has another advantage - speed. It is one of the world's first products with a special LTE-Advanced capability, according to Telstra. LTE-Advanced uses the 1800Mhz and 900Mhz bands as combined spectrum to boost download speeds, in addition to improving reception range and building penetration. This could be useful if you’re in an area that has a weak 4G signal.
Note that LTE-Advanced isn't widely available yet though. A media release issued by Telstra stated there will be "widespread deployment [of LTE-A] in the coming years.”
The new hotspot modem also features a colour touch screen that displays a data meter, signal strength, read SMS notifications, number of devices connected, battery level and the ability to manage other settings directly from the device instead of having to use a PC browser.
Plans start from $56 per month with 8GB of data included each month on a 24 month contract.
Telstra also enabled 4G access in the regional Queensland town of Dalby as well as claiming that their 4G coverage is now four times greater than the competition.
Interestingly, Optus is touting its own improvements to its 4G network, activating a technology called  4G Plus in in Sydney, Brisbane, Melborne and Adelaide. As with Telstra, the move is aimed at easing congestion on the 4G network during times of peak use. The new Optus technology requires a compatible modem or phone.
Copyright © BIT (Business IT). All rights reserved.
Tags:
4g hardware lte ltea lteadvanced services telstra wifi
By Krishan Sharma
Staff Writers
Nov 11 2013
12:41PM