This phone repairer comes to you 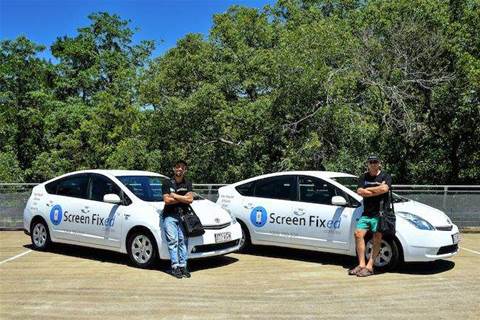 Cracked your smartphone screen? Need the device to keep the business running smoothly, but can't find the time to go down the street to a "phone doctor"? Maybe it's worth calling up a phone repairer who does door-to-door.

Mobile mobile-phone repairer Screen Fixed has expanded from Brisbane and Toowoomba to Sydney, with plans to reach Perth and Canberra later this year.

The idea is simple: when a phone needs a repair, Screen Fixed sends a technician to the customer rather than expecting them to visit a shopfront or kiosk location.

Founder Ben Turner got the idea after breaking his iPhone 4 in 2012 "and finding the repair process frustratingly difficult."

"I found myself asking 'wouldn't it be better if someone could come to me'?"

Screen Fixed specialises in iPhone and Samsung repairs. Prices start at $30 for an iPhone 4 rear cover replacement, or $35 if the phone is a Galaxy S3.

When it comes to current models, an iPhone 6 battery replacement costs $79 and a screen repair is $199. For a Galaxy S6, the corresponding prices are $110 and $299. Screen repairs are guaranteed for two years.

Potential customers can request a quote online, and if accepted arrangements are made for a technician to visit at a convenient time.

"We set ourselves apart by offering a far superior product and service, while also putting a large emphasis on the customer experience and ensuring we use the highest quality parts," Turner said.

In addition to the geographical expansion, Screen Fixed is considering a express mail-in service for customers outside its service areas, although that seems to go against the 'we come to you' proposition.

Oh, one more thing (reference intended). You may remember that the iPhone in particular can throw the infamous "Error 53" after a third-party screen replacement, if it's not done right.

Apple used to claim this was a bug, but rather a security feature, designed to protect the touch sensor (and thus your sensitive data, ID and more) from tampering.

Fortunately, after concerns the company could be seen to be cutting third-party repairers out the market (and threat of a class action suit), Apple released a software update to fix Error 53.