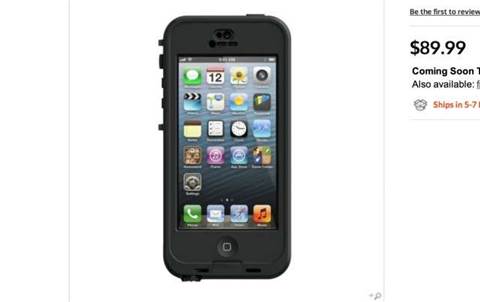 The case forms a waterproof seal between itself and the touchscreen which the company says provides complete water, dirt, snow and shock protection.

There’s nothing worse than going through the expense and inconvenience of having to get your phone replaced or repaired because of accidental damage.

There are plenty of big and bulky cases or protective films on the market (we ran through a few of them here) that are designed to protect your phone from the occasional run-in with the pavement.

The problem with these products is that they usually come with some sort of thick screen cover that can add screen glare and degrade the quality of the display overall.

This week LifeProof announced the ‘Nuude’ all-protective case, which loses the screen cover but still keeps the phone safe from water, drops, sweat, dirt and other possible hazards that our smartphones can unwillingly encounter.

Even though there is no extra layer of protection on the screen itself, the case forms a waterproof seal between the case and the touchscreen that LifeProof claims delivers complete water, dirt, snow and shock proof protection.

You do pay a bit of a premium for going screenless though, with the retail price set at $99.95 in comparison to something like the Griffin’s Survivor case ($69.95) or the Cygnett Workmate ($34.95).