This map shows who owes you money 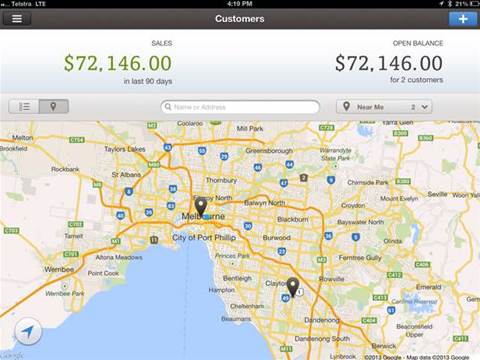 The QuickBooks Online app for iPad also show you how many kilometres away they are so you can decide if it's worth the time to pay them a visit.

What you're looking at is a map pinpointing the location of two customers and on a second screen how many kilometres away they are from your current location, and the crucial factor - which one has an overdue payment.

It's one way to chase customers who owe you money, or at the least some peace of mind knowing you have a bird's eye view of who and where they are. 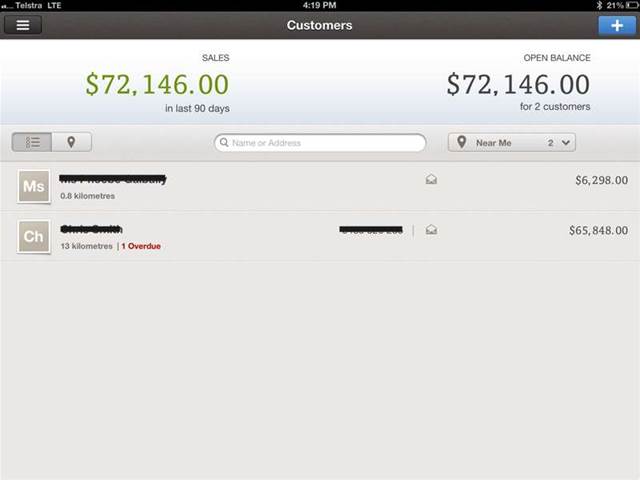 Whichever way you look at it, it's just one example of how the makers of cloud accounting services are trying to convince thousands of Australian businesses to switch from using spreadsheets.

In this case, the images are screenshots showing the QuickBooks Online iPad app. A new version of Quickbooks Online recently became available in Australia - as well as a phone app, there's a specific version for the iPad designed to take advantage of the tablet. For example, the interface is designed so you can control various elements by using sliders with your finger, and people can write their signature.

The QuickBooks Online app isn't the only one for mobile devices - Xero, for example, has a mobile app called Xero Touch which can be used to "Find contacts, call customers and suppliers, view them on a map."

You can also see some screenshots of a new phone app MYOB is working on here, including one screenshot showing a list of customers with overdue amounts. We notice what looks to be a location icon in the screenshot, though we'll need to confirm that this is a "show me on the map" function. This MYOB phone app won't be available till next year.

Do you use Quickbooks Online? Here's 4 clever tricks you might not know about