The Windows 7 upgrade countdown has begun - what if you don't want to? 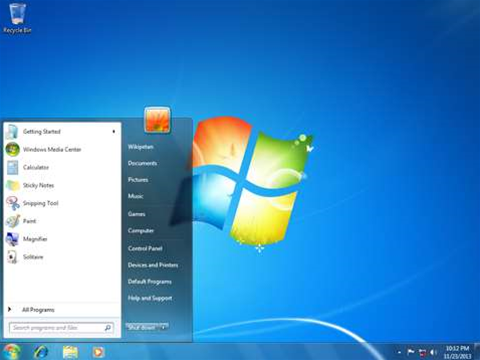 It will be possible to continue using Windows 7 and get security updates after mainstream desktop support ends. Click to learn how.

Microsoft has announced that Windows 7 users will soon see messages advising them to upgrade to Windows 10.

The company styled the notifications as a “courtesy reminder” that users will see “a handful of times” throughout 2019.

Microsoft last year revealed that support for Windows 7 will end on 14 January 2020, while Office 2010 will stop receiving updates by 13 October the same year.

“By starting the reminders now, our hope is that you have time to plan and prepare for this transition,” Microsoft said in a blog post.

“These notifications are designed to help provide information only and if you would prefer not to receive them again, you’ll be able to select an option for ‘do not notify me again’, and we will not send you any further reminders.”

Those who click on the notifications will be taken to information on "the latest line-up of modern PCs and information for moving from Windows 7 to Windows 10".

Microsoft's post announcing its new nagware also calls for Windows 7 users to adopt Office 365. That suggestion is in line with Microsoft's recent call for users to ignore Office 2019 in favor of Office 365.

What if I don't want to upgrade to Windows 10?

For those not quite willing to make the move, Microsoft last year revealed it will offer a paid security support add-on called Extended Security Updates (ESU), which will be offered until 2023.

There is also another option for businesses runing Windows 7 that don't want to move to Windows 10 in the near future, but still want Windows security updates - Windows Virtual Desktop, MIcrosoft's virtual, cloud-hosted desktop-as-a-service that's in Public Preview.

Microsoft’s also priced the service sweetly – it’ll cost nothing extra under some Windows 10 Enterprise or Microsoft 365 licenses - other than Azure compute, storage, and networking costs associated with the virtual desktops you run. But that arrangement also means Windows 7 users will be paying Microsoft for an OS licence and cloud services.

Another point of significance is that WVD means Microsoft has caught up with AWS, Citrix and VMware. AWS offers Workspaces, a cloud-hosted desktop consumed through a dedicated software client. Citrix and VMware each have desktop virtualisation software they’ll happily run in a public cloud. Microsoft reckons it has them all covered by running on any device and its always-updated desktop OS proposition.

Microsoft’s not said when the service will graduate from a Public Preview, but hasn't advised against running production workloads. Azure services that reach Public Preview are usually pretty robust and tick over to a proper product in not too many months.

Microsoft’s popped up a demo video with more details and you can watch it below.