The rebirth of the HP-12C: How one man reimagined a calculator from 1981 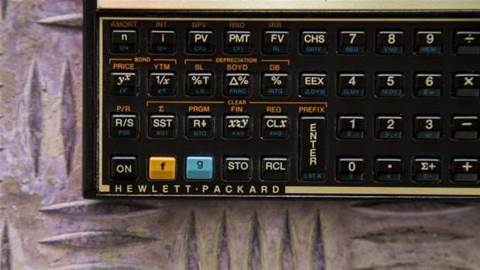 For me, the story started in 1982 with a secret initiation ceremony. I was taken to the personnel director's office and handed a small cream cardboard box. I was told the serial number had been recorded against my name and, should I ever leave the bank, I would be expected to return the package – complete – upon my last day.

Inside that cream box was an HP-12C financial calculator. Then, the HP-12C was – and still is – the badge of rank and seal of office for merchant bankers the world over. Priced at a tidy £220 (£1,221 in 2015 pounds, or $2552, adjusted for inflation), this was a device that bucked just about every trend, be it in calculators, UI design, disposability, battery life, or comprehensibility for the uninitiated. Getting into the Freemasons is a cakewalk compared to mastering the 12C. I have seen the manual quoted, with page and paragraph numbers, in international loan agreement documents with values running into the hundreds of millions of (mid-1980s!) pounds. I'll explain exactly why that was the case a little later.

In those days, HP didn't content themselves with owning the minds and fingers of the top 5% of the banking profession. Other versions of the same form factor and entry logic were available for scientists, engineers and programmers. The HP-16C would do bitwise logic operations and convert from hex to decimal to octal, at a single press of one of those obdurately hard, clicky buttons. This was anything but a disposable calculator – even the labels on the buttons were moulded all the way through, making them impossible to rub off.

Anyone who is familiar with these pre-PC, pre-smartphone devices can now content themselves by prodding away at a fully functional emulator on all manner of x86, iOS or Android devices. In the wake of the HP-12C, a whole slew of apps and software emulators took advantage of HP's liberal outlook towards the “source code” of its calculator.

However, for one man, Michael Steinmann, this fakery wasn't quite enough. 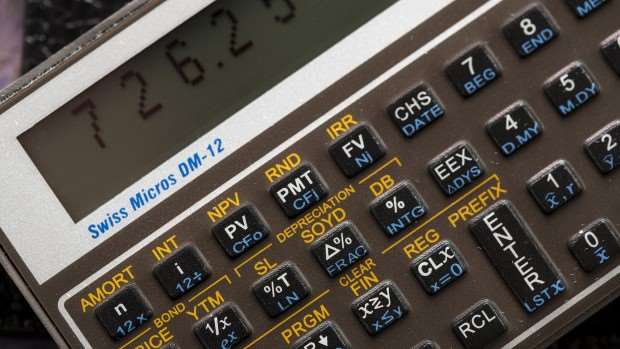 The more I delved through his website (www.swissmicros.com), the more I wanted to hear his story – why he chose to embark on this improbable project, where he gets the hardware from and how much interest he's had. Several emails were exchanged, but once I found out that he was based in Zurich, a date was set. I knew I would be passing through on a forthcoming trip so there was simply no excuse.

Peruse Michael's site and you won't find carbon copies of the HP-12C. Instead, you'll discover a range of miniaturised versions – hardware emulations no less – of the most popular models in that early generation of HP calculators, all powered by a low-power LPC1115 ARM processor.

Michael's devices are much, much smaller than the originals, but thanks to a mysterious collaborator in the Czech Republic, they exactly duplicate all the functions of the machines in the “C” range of HP calculators – the 11C, the 12C, the 15C and the 41C. The single button cell in Michael's design doesn't quite have the multi-year life of HP's original triple stack, but no-one is likely to care, because changing it only involves unscrewing four tiny screws in the metal rear cover of the calculator. That in itself is a little ceremony, like being admitted to the Worshipful Company Of Horologists. The covers, incidentally, come in an impressive range of materials and finishes (I went for unpolished brass). 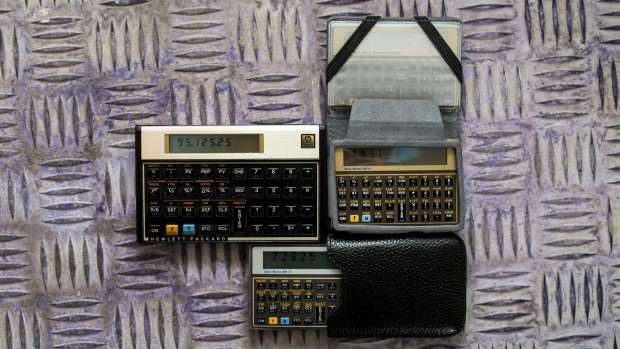 But I can almost hear the cries echoing across the internet – a million voices winding me back to the first and most basic proposition. “It's a damn calculator,” they yell. Not only that, it's an old and hard-to-use calculator, popular amongst people we don't really even like very much – what is this madness? Can't bankers afford a laptop with Excel or something? What on earth is the appeal of these stupid, anachronistic things?

To answer those questions, you would only have to spend 30 seconds in Michael's company. His enthusiasm for the project is infectious.

He arrived at my Zurich hotel with a tiny cardboard box under his arm, and we sat in the September sun as he started taking out the raw circuit boards, displays and key cap sheets. The first things he wanted to show me were the back covers, stamped metal trays with screw-holes at each corner. He lovingly described his home titanium anodising kit, showing me the various different colours he could achieve. 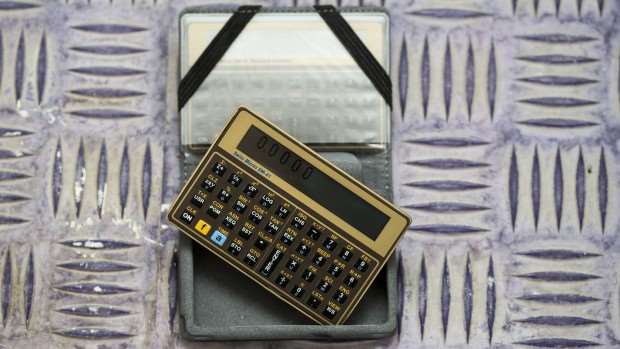 I was instantly transported back to another presentation, years in the past, from one of the senior product designers at Dell. Where all the other little rooms and topics at the exhibition relied heavily on PowerPoint and projectors, this designer had boxes full of all the final samples of case and face designs for all manner of Dell products. He could talk at length about what made something tacky (matte metal) or “blingy” (the same moulding coated with a layer of chrome). That man's contribution to Dell's products was how people feel about something they touch.

Michael is devoted to much the same topic. After all, little is going to change in the software, which wasn't especially fast-changing in the early 1980s, and can't be allowed to vary much these days either. Those loan agreement papers I saw back then were absolutely predicated on HP's code giving the same answers – bugs and all – for the foreseeable future.

What really fascinated him was that strange physical presence the original HP calculators had, the way their features and physical feel conspired to make them an engine of calculation and a badge of rank at the same time. His is not a complete and exact physical replica, but that doesn't matter one bit. His reincarnation of the world's most expensive and exclusive consumer single-purpose computing device retains its own haptic charm, and weaves its own unique spell. 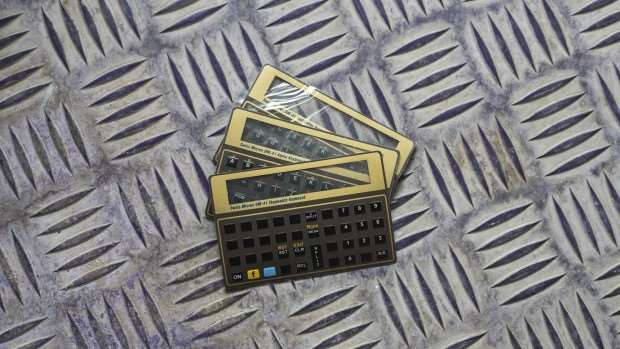 Outside the realms of computing and IT, the tactile charm of a physical device is used to sell all sorts of products. Car manufacturers exert huge effort in creating and designing “feel” – how a button sounds when it clicks, the percussive thunk of a firmly-closed door. It's something that's sadly missing from modern computing, almost everything reduced to the same tactile experience of a finger pressed on cold glass.

While Michael's calculators can't match the sensation of using an original 12C, the theatre of being a financial adviser or corporate money man is massively enhanced by being able to twirl a little, mysterious box in your hand that spits out the payments on a loan given the amount, years and rate– or the amount you can borrow given your maximum monthly payment – with nothing more than a few prods at the keys. According to Michael, one key attraction for this interest group is that they can keep talking on their phone while making the calculations.

Not that the finance marketplace is currently doing a huge amount of business with Michael: he was much more enthusiastic about the engineering and science versions of the platform. The 41C emulator, packed into the same petite ARM-based hardware as the others, is his tour de force. Back in the day, the 41 was the PDA for the absolute gurus in every field, being much more a general-purpose compute device than merely a simple calculator. Michael sells more of these than he does the 12C financial variant these days, and includes HP staff members in his list of customers.

“Can I copy something you made 30 years ago?”

We talked for a while about HP's reaction to SwissMicros. Michael related a story concerning one HP employee (and SwissMicros customer) who, despite not being in the legal and intellectual property department, was prepared to go and sound them out. As a result, there have been some official responses from HP regarding his project, though not in a way that sounds like the final word to me.

Based on my experience of the copyright and trademark business, I would want the strongest proof possible – large corporates aren't famous for sticking to their promises in matters such as this. Michael is unfazed, though. Ultimately, he's happy to have made the project work at all. He clearly loves every step of the process: finding the parts, sourcing fixes for manufacturing issues, getting the PCB design right and making sure that the durability is up to scratch. From talking to him, it's clear that this is a genuine labour of love, not a clumsy attempt at profiteering from HP's long-since forgotten calculator heritage.

At the table, Michael starts to put together my 12C. The PCB and display are flipped over and then stuck down with foam pads, the keyboard is carefully aligned with the contact pads and stuck down, the battery cell is inserted and startup keypress test completed (as mandated by HP's original designers some time in the late 70s). The process is so straightforward that he's able to make all the orders at home. As he builds the calculator in front of me, Michael recounts his initial problems with the quality of the key contact pads, and that his new-found parts supplier requested only one payment for his services – a completed calculator for himself.

I'm not surprised to hear this. I have been constantly amazed by the reactions I've had to these little devices. They seem to connect with something that's not really been an IT speciality – and that Apple has steamrollered over, by accident, with the iPhone/iPad continuum. SwissMicros has tapped into something of the appeal of the original BlackBerrys, mixed with the pleasure that comes from using a well-designed TV remote control, all bundled up with an air of exclusivity and a druidic level of difficulty in learning and using the tool. I don't expect that Michael will start competing with Casio or Brother in the calculator business, and he doesn't want to – he's extremely happy producing modern jewellery for both enthusiasts and uber-nerds. I do think, though, that the real benefit of this incredible, tiny project is to show people what can be achieved on your kitchen table – if you're the right kind of guy.