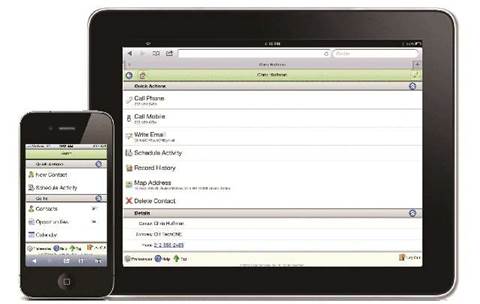 Want to extend your customer marketing into Facebook and LinkedIn? We look at the new features of this well-known CRM software.

ACT! has been a mainstay CRM application (what does CRM mean? Read our article about CRM here) for some small businesses since the 1990s, so the product is of particular interest.

It came to wide attention after its developer was acquired by Symantec, but the ACT! product was sold to SalesLogix at the end of the decade, and then that company was acquired by Sage in 2002. That led to the program being renamed ACT! by Sage, and subsequently Sage ACT!.
What's new in Sage ACT! 2013?
Newsletter Signup

I have read and accept the privacy policy and terms and conditions and by submitting my email address I agree to receive the Business IT newsletter and receive special offers on behalf of Business IT, nextmedia and its valued partners. We will not share your details with third parties.
In line with much of IT, the focus is on being able to get to your data when you're away from your desk, as well as social networking.
Sage ACT! Premium 2013 ($553) includes Sage ACT! Premium Mobile which provides live mobile access to ACT! data from iPhone, iPad and Android phones and tablets.
More limited mobile access is available from the $313 Sage ACT! Pro 2013 if Sage ACT! Connect is purchased as an add-on. Since the Connect module costs $69 per user per year, if you need four or more mobile users you're better off with the Premium edition, which also includes web access. On the other hand, Connect does support BlackBerry and Windows Mobile in addition to iOS and Android.
Facebook, LinkedIn, Gmail, Outlook
Social media comes in the form of LinkedIn and Facebook integration to show the 25 most recent posts from each contact. Sage ACT! contacts are also associated with LinkedIn connections and Facebook friends.
The program also integrates with Outlook, Word and Excel, and with Google Contacts, Calendar and Gmail.
Another add-on available on a subscription basis is Sage E-marketing for ACT!, which automates email campaigns and includes LinkedIn, Facebook and Twitter integration.
Also new in the 2013 edition is improved automation through an expanded Smart Task feature. While a range of Smart Tasks are provided, they can be customised or users can create their own.
Upgrades are available ($210 for Pro 2013 and $405 for Premium 2013), along with volume discounts.
Copyright © BIT (Business IT). All rights reserved.
Tags:
2013 linkedin facebook android iphone ipad blackberry windows act act 2013 sage pro sage sage act software
By Daniel James
Oct 10 2012
1:25PM