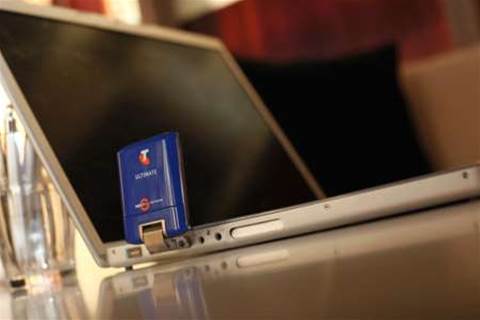 The newly released $299 Ultimate USB modem took advantage of a dual channel HSPA+ upgrade to the Next G network to offer a maximum download speed of 20.1Mbps.

The dual-channel system had been installed in all major capitals and a number of regional centres, with Telstra estimating that 50 percent of the Australian population had access to the upgraded network.

While the entry-level business plan for the device offered 6 GB of data a month for $69, Telstra was also offering an "unlimited" plan (with a fair use restriction of around 120 GB a month) to government and enterprise fleet buyers of the device.

Paitaridis declined to specify what size of purchase would be required to qualify for that plan, but said it would be in the "hundreds" of users.

The new speeds could make Next G a potential element to plans to expand national broadband coverage through wireless networks, but Paitaridis said it would not work as the sole solution.

The heavy lifting would always be done by fixed networks, he said.

Telstra had begun selling its initial allocation of 2,000 modems through its enterprise account managers, and would begin selling it through Telstra retail outlets from October 5.

At that time, it would begin phasing out its current top-of-line business USB modem, the Elite.