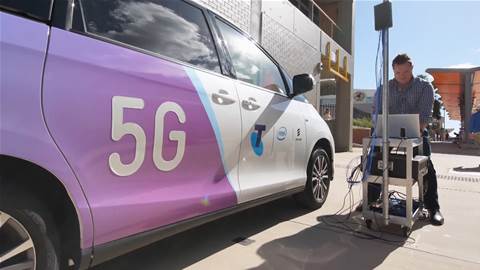 Both have a 1TB cap and download speeds between 50Mbps and 600Mbps.

Telstra has launched its first generally available 5G internet plan for homes and businesses, with some caveats.

There is a single plan available each for homes and businesses, although, from the telco’s website, there appears to be no difference between the two.

These speeds were measured “during the busy evening period between 7pm – 11pm over a representative time period,” Telstra said in a statement.

A Telstra spokesperson said of the wide range quoted for speeds, “As there are a number of factors that play a part in performance we provide this range as a guide. With that being said, we’re seeing an average of 378Mbps download and, as we grow our base of customers, we’ll update speed ranges and averages.”

Both plans also include a 1TB data cap, which, a statement from Telstra fixed connectivity group owner Sanjay Nayak said is “enough for over 330 hours of HD Netflix streaming.”

The spokesperson told CRN that they may roll out plans with different data caps in the future.

Both the business and home plans use the same Arcadyan-supplied 5G modem.

There were no specifics offered about the latency of the connection, the spokesperson said it “Depends on a range of factors including signal strength, distance from 5G site, server, applications and in-home factors.”

The connection setup is “a complete plug and play experience. Just find the spot in your home or business premise where you get the best 5G signal, plug the modem in, turn it on and you’re good to start browsing the web,” Nayak’s statement said.

He added that there are a limited number of connections available “per post code”.

Telstra has “Australia’s largest 5G network, covering over 75% of Australians” and aims “to deliver about 95% population coverage by FY25 and we’ll continue to roll out our 5G network," the statement said.