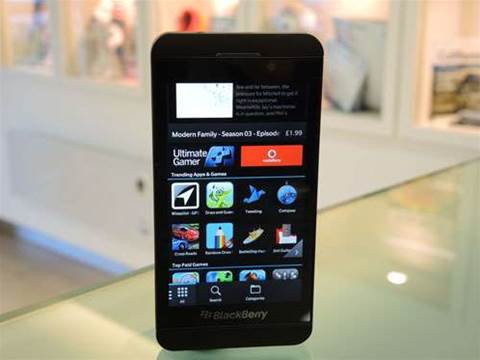 Telstra has released pricing details for the new Blackberry Z10 smartphone, which along with Optus, are the only two confirmed carriers that will be carrying the phone in Australia.

Telstra are offering the Blackberry Z10 on two plans, starting with a data-only $49.95 mobile connect business plan for $0 upfront on a 24-month contract, which includes 2GB of data for using work applications with no included call credit.
The second plan is with Telstra’s $60 Every Day Connect Plan with a $7 handset repayment, $600 of included calls and MMS, unlimited SMS and 1GB of data.
Newsletter Signup

I have read and accept the privacy policy and terms and conditions and by submitting my email address I agree to receive the Business IT newsletter and receive special offers on behalf of Business IT, nextmedia and its valued partners. We will not share your details with third parties.
As reported earlier this month, Optus plans start from $35 with a $17 handset repayment with only 200MB of monthly data, up to a $130 plan that comes with 4GB of data.
The $60 Optus Plan with a $6 per month handset repayment looks to be the most competitive with Telstra’s offering, with unlimited local voice calls to other Optus mobile users, unlimited SMS, $650 of included call credit and 1.5GB of data. You can view the full list of available Optus plans here.
Telstra and Optus have both confirmed that it will run on their respective 4G networks.
We note that Optus is shipping the handset from the 25th of March, a day earlier then Telstra.
If you want to buy the phone outright, than the Z10 will be available for sale from the 25th March from Harvey Norman and JB HI-FI for $650.
Copyright © BIT (Business IT). All rights reserved.
Tags:
blackberry optus plan price services telstra z10
By Krishan Sharma
Mar 19 2013
2:28PM