Tablet, laptop or hybrid: which is best? 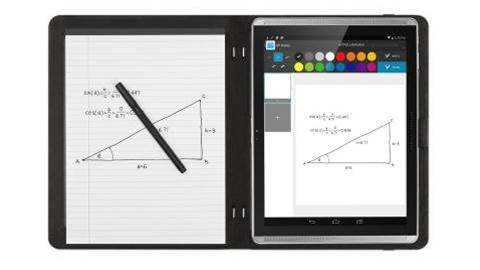 There's no simple answer, so make sure you consider all the key factors when choosing a mobile device for you or your business

Choosing a new computer used to be oh-so-simple. Desktop PC or laptop, sir? Both formats had clearly defined advantages and disadvantages, they looked totally different and there was very little chance you'd make the wrong choice.

Now, if you want tech to use on the move, you're overwhelmed by options: conventional laptops, laptops with touchscreens, two-in-one devices with detachable keyboards, laptops that fold into tablets, pure slates… no wonder people are confused.

Nonetheless, these devices can still be split broadly into three categories: laptops, tablets and hybrids. In this guide, we'll run through the pros and cons of each, judging them on various criteria – including price, battery life and performance – to help you reach a decision about which type of device suits you, or your business, best.

If you're looking for the cheapest device possible, compact tablets are the most affordable of the three device categories. A year or two ago, sub-$300 tablets were utter landfill (the excellent Nexus 7 excepted), but there are now several decent compact tablets that don't reach the three-hundred mark.

As you'd expect, these devices lack processing power compared to more expensive machines, but they're still quick enough to run desktop applications. That's possible because, despite their low prices, many come with Windows 8 installed.

Cheap, compact tablets also provide minimal storage: 8GB or 16GB is the norm, meaning you may need to spend extra on boosting the available memory with a memory card – if the tablet offers a memory card slot in the first place. However, if all you're looking for is a handheld for browsing the web, scanning email and watching Netflix, a cheap compact tablet will do just fine.

If you want a device with a proper keyboard, not just an onscreen model, you can pick up cheap laptops from around $350-$450. At this price, most laptops don't come with a touchscreen; if that's a key feature for you, you're better off exploring two-in-one hybrid devices – that is, tablets with a detachable keyboard.

Hybrid and laptop prices range from $800 to $5000 and beyond, but there's a simple rule of thumb: more money is rewarded with higher-quality, higher-resolution screens, greater processing power and a better build standard.

We'll continue to cover what you get for your money as we progress through this guide. 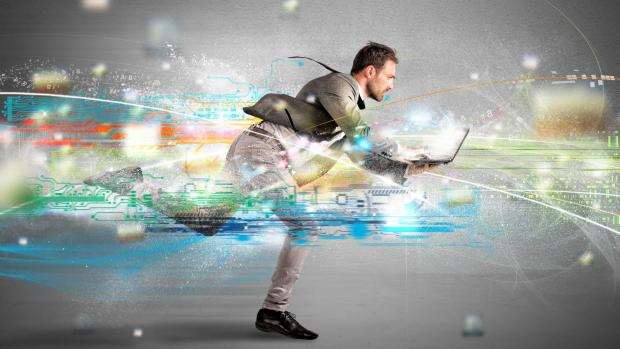 Whether you're talking about tablets, laptops or hybrids, performance is almost inextricably linked to price. At the bottom end of the tablet market, you're looking at devices running on Intel Atom or ARM-based processors, which are predominantly designed with battery life and price in mind, not lung-busting power.

Budget tablets also come with the bare minimum of RAM – 1GB or 2GB is common. In practice, this means these devices can handle single tasks quite well – certainly video playback, and even basic video editing – but performance will suffer when you start to use demanding applications side by side.

If you need a hybrid or laptop for more demanding work, look for devices running Intel Core processors. These range in performance from low-budget Core i3 processors to the middling Core i5, right through to the expensive but powerful Core i7.

As a rule of thumb, hybrids are generally less powerful than conventional laptops, as they have to squeeze in all their components behind the screen. Hybrids can also struggle to cool those crammed-in components, and so tend to use lower-power processors that don't require as many fans to keep them cool.

If you're performing intensive tasks such as serious video editing (say, creating an HD video that's over five minutes long), 3D gaming or even ploughing through massive spreadsheets, you'll benefit from the power of a full-blown laptop. Look for Core i7 processors, at least 4GB of RAM and dedicated graphics chips.

The very cheapest compact tablets may only give five or six hours of use between charges, whereas more expensive tablets might last ten or even 12 hours before needing a top-up. Tablet batteries will drain much more quickly if they're used for demanding games, rather than for watching a film or using Facebook.

Cheap hybrids and laptops tend to have poor battery life, sometimes as little as two or three hours. Here, both the size of the screen and the size of the battery are critical.Generally speaking, bulky 15in laptop screens will put much greater demand on a battery than a 12in ultraportable's display. Larger budget laptops also tend to come with smaller batteries, as the manufacturers often assume those devices will generally be used in one place and so try to reduce bulk and cost.

Battery capacities are normally expressed in watt-hours (Wh). If you're comparing two similarly sized devices, the battery with the highest number of watt-hours will generally deliver better battery life. Treat the battery life figures quoted by laptop manufacturers as absolute best-case scenarios. Only at the expensive end of the laptop scale (£700-plus) are you likely to get “all-day” battery life, which means light-to-medium usage on a typical 9-to-5 work day. 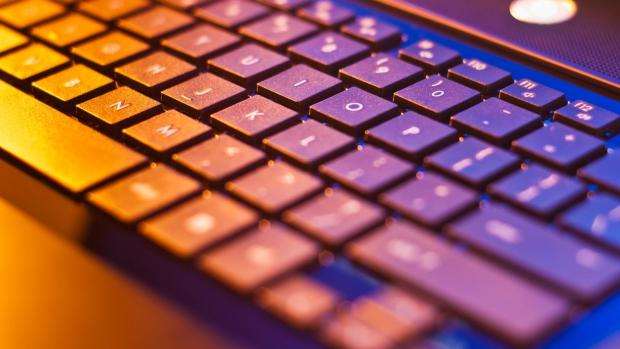 Generally speaking, the keyboards on hybrids are not as good as those on conventional laptops, especially on devices with detachable keyboards. Hybrid keyboards tend to be cramped, with key buttons – such as the space bar, Backspace and Enter keys – reduced in size. Hybrids can also be more uncomfortable to type on, since sometimes the screen can only be at angled at one or two set positions, rather than adjusted to any angle, as on a laptop.

However, some tablet and hybrid devices offer the advantage of stylus input. We're still a fair way from being able to jot handwritten notes on a screen and have everything perfectly transcribed into text, but stylus input is superb for jotting quick memos, annotating maps or diagrams or sketching ideas and design concepts. Those who are serious about drawing with their tablet or hybrid should look for pressure-sensitive styli.

If you're looking for corporate-grade security features, a conventional laptop is your best choice. Features such as fingerprint scanners, smartcard readers, locking slots and Trusted Platform Modules are generally only found on business-grade laptops.

That said, all Android, Apple and Windows tablets now offer some basic safeguards. You can, for example, locate and lock a lost device via the web browser, but only if it's capable of receiving a data connection. Businesses with device management software can also wipe tablets remotely if the device is stolen, ensuring no sensitive business data falls into the wrong hands.

Those buying a pure tablet device have the choice of three operating systems: Apple's iOS, Google's Android or Microsoft's Windows 8. Apple's tablets marry superb hardware with by far the best equipped App Store of any tablet operating system. That's because the best tablet apps tend to be released on iOS first, and because Apple takes a tougher line on quality.

Android is a strong second, and actually has more apps on offer. However, too many of its apps are “universal” – in other words, designed for smartphones but awkwardly stretched for tablet screens.

The Windows Store is the weakest of the three, with slow sales of Windows tablets failing to attract app developers. Even big names such as Spotify have declined to develop apps specifically for Windows tablets. However, Windows tablets do have the undeniable advantage of being able to run the same desktop software you would find on a laptop or desktop PC.

You wouldn't want to run full-blown desktop apps on a pure tablet, since they're predominantly designed for keyboard and mouse use, not touchscreen input. However, hybrid devices running Windows 8.1 get the best of both worlds: touchscreen apps from the Windows Store and desktop software such as Word, Excel and Photoshop.

There's no simple answer to the question of which is best. It's like comparing bicycles, motorbikes and cars: each have their different strengths and purposes. For heavy-duty work, the traditional laptop is still king. Laptops offer the most powerful processors, the biggest storage capacities and the best keyboards.

Hybrids have the upper hand for those who like to mix work and pleasure. They can be used like conventional laptops when there are emails to be answered or expenses to be filed, then folded or detached into a tablet configuration when you want to put the plane seat back and watch a movie on the return leg of your business trip.

Tablets offer unrivalled portability and the instant-on accessibility that allows you to check your email or flick through Facebook without going through the rigmarole of booting a PC. There are few jobs for which we'd want to use tablets as our primary device, but they make a great companion device for a laptop or a larger hybrid.

Tablet, hybrid or laptop? Here are three work scenarios for the different types of device. 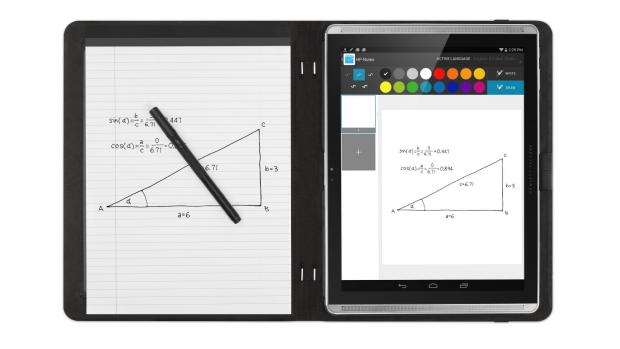 Anthony is a senior sales executive for a pharmaceuticals company. He spends the majority of his time on the road travelling between meetings, only occasionally returning to the office, where he shares a hot desk with the rest of the sales team.

His primary device is a Windows 8.1 tablet. It has a low-power Intel Atom processor that helps the battery last throughout the working day, and he often uses the tablet to flick through sales presentations with clients.

In the gaps between meetings, Anthony can check his email and file his travel expenses, using the camera on the tablet to make digital copies of the necessary receipts. In addition, on the regular occasions where work takes him away from home, he can use the Skype app for Windows 8.1 to read a bedtime story to his children from his hotel room. 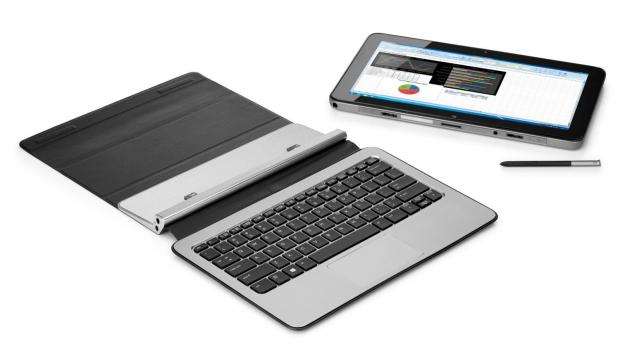 Angela is the chief executive of a mid-sized manufacturing firm. She spends much of her time travelling to Europe to meet with suppliers and potential customers, the rest in the company's offices. Her two-in-one has all the power and features of a regular laptop, allowing Angela to deal with her overflowing inbox using a full-sized keyboard, or navigate through the spreadsheet of the quarterly accounts with the built-in trackpad.

When she's travelling by car to the airport or waiting for a flight in the business lounge, she can detach the screen from the keyboard base and use the device as a tablet, enabling her to read documents, flick through presentations or even plug in a set of headphones and watch a movie on the Full HD display. If she hasn't finished the movie by the time the plane is taxiing back to the gate, she can finish the film at home by beaming it wirelessly to her television using the integrated WiDi technology. 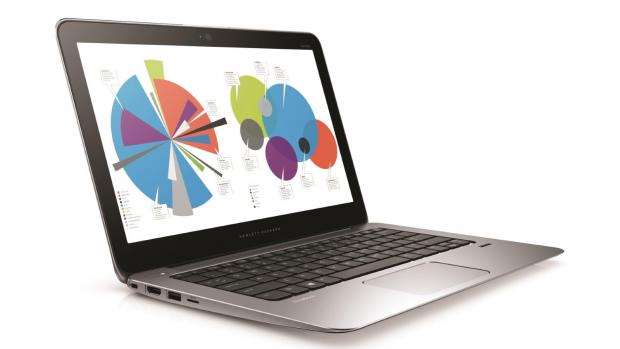 Vikram is the assistant financial controller at an advertising agency. He spends much of his working life plugging numbers into complex, macro-laden Excel spreadsheets, so he needs the heavyweight processing power of a Core i7 laptop. However, he also spends a good portion of his day running through departmental budgets in meeting rooms across the company, and thus requires a mobile unit that he can take with him into such sessions.

An Ultrabook meets Vikram's needs perfectly. The 14in display provides plenty of workspace, but when Vikram is back at his desk he can simply slot it into a docking station and benefit from dual displays, plus an external mouse and a keyboard.

Securing the sensitive data on Vikram's laptop isn't a problem, either. The built-in fingerprint and smartcard readers prevent unauthorised users getting access to the firm's financial data in the event the laptop is lost or stolen, and the data on the hard disk is fully encrypted.