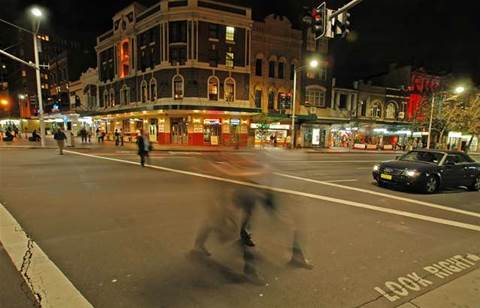 From doubling late night city buses to light rail and outdoor dining, the strategy for late night Sydney activities is being discussed tonight.

If you own or run a bar, gallery, shop, restaurant, club or any business affected by late night trading in Sydney's CBD, then you might be interested in tonight's discussion at Sydney City Council.

On the agenda tonight at Sydney Town Hall will be the OPEN Sydney Strategy and Action Plan - a wide-ranging plan which includes a proposed review of all night-time taxi ranks, doubling of NightRide buses, a 24-hour library and possible trading hours till 10pm instead of 5pm for retailers in appropriate areas.

You can download the 57-page OPEN Sydney Strategy and Action Plan here. It will be "the basis for all decision-making about Sydney at night between now and 2030."

Drinking, buses on the agenda
Reducing a focus on drinking for the "night-time economy" by 2030 is one overall goal. Others listed by the initiative include (information quoted from the City of Sydney web site):

This video by the City of Sydney states that 28.4% of all jobs in the city come from late night business and services. Drink and entertainment are significant economic drivers, but the biggest is food.

Transport is a key concern. According to research cited by this press release from the Lord Mayor in 2011, late night and early morning pedestrian numbers on Darlinghurst Road in Kings Cross on a Saturday night can be more than 20,000 people.

The OPEN Sydney Strategy and Action Plan states that crowds in Kings Cross and George Street are "at their greatest" when trains end about 1am.

Research by the University of Western Sydney (UWS) cited in the same document found "NightRide bus services replacing trains are neither frequent nor desirable enough to meet crowd demands."

Other items mentioned in the OPEN Sydney Strategy and Action Plan:

The action plan going to Council tonight follows public input and debate including surveys, roundtables, community forums and submissions. The late night Sydney plan has already been through draft versions.