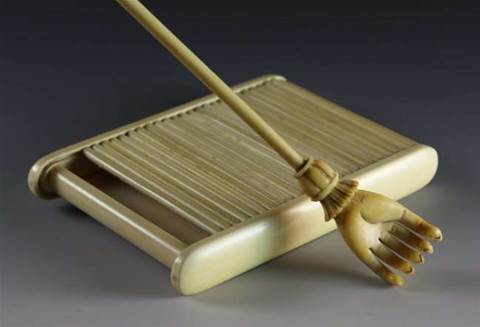 Sadly, this 18th century ivory back-scratcher does not qualify for the instant write-off

Former Treasurer Joe Hockey's 2015 Federal budget introduced a provision allowing small businesses to immediately write off the cost of new assets costing up to $20,000. Previously items costing $1,000 or more had to be depreciated.

At the time, a survey commissioned by Staples Technology Solutions found nearly 40 percent of the 500 small business respondents said they would purchase assets because of the tax break.

According to the latest MYOB Business Monitor survey of more than 1,000 small or medium business owners, 63 percent said they would vote for a party that would keep the write-off - it currently lapses at the end of the 2016-17 financial year.

But only 25 percent have taken advantage of the write-off so far. Those that haven't say the reason was that they either had not needed to make a qualifying purchase, or that the don't have the cash to buy anything.

Other popular policies included simplification of the GST/BAS reporting process, reducing the company tax rate from 30 percent to 28.5 percent, assigning a proportion of government procurement contracts to small businesses, and increased government funding for skills, training and apprenticeship programs.

The only other tech-related issue to make the top ten was the FBT exemption on the purchase of work-related portable electronic devices, although "The Government continuing to work on faster internet speed would go down well with a significant number of SMEs," said Moss.