Spreadsheets in the cloud: are you feeling lucky?

Ask yourself, how much are you prepared to trust a cloud provider of spreadsheet services?

Readers with long memories may remember me dissecting various problems with Excel’s calculation methods over the years (indeed, this discussion in these hallowed pages stretches back well over a decade).
One of the leading investigators into Excel’s maths incapabilities is Bruce McCullough, now professor of decision sciences at Drexel University, Philadelphia. I can’t begin to understand the statistical tests he and his team employ, because I’m neither a statistician nor a mathematician, and I’ll confess I gave up at university at the point where I had to learn Laplace transforms. Nevertheless, I’ve communicated with Professor McCullough over the years, and I have faith he knows what he’s talking about.
Newsletter Signup

I have read and accept the privacy policy and terms and conditions and by submitting my email address I agree to receive the Business IT newsletter and receive special offers on behalf of Business IT, nextmedia and its valued partners. We will not share your details with third parties.
His latest paper, “Spreadsheets in the Cloud – Not Ready Yet”, goes into detail about some significant problems with various cloud-based spreadsheet packages, and compares them, where applicable, to their local-machine equivalents. The paper reveals there can be important differences in the calculations performed by desktop Excel and the Excel Web App you’ll find in Microsoft’s hosted services. 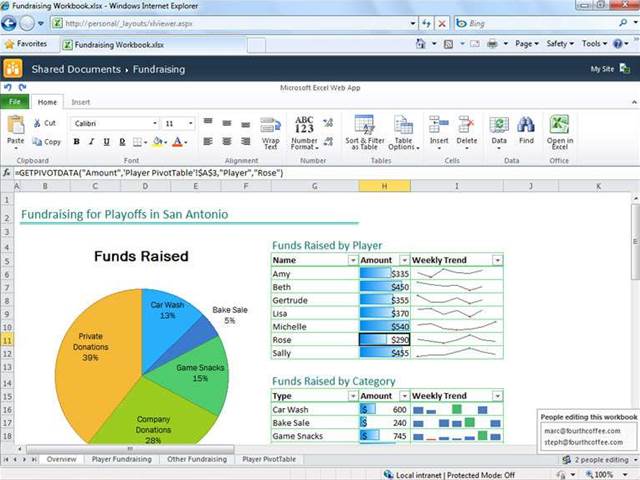 The Microsoft Excel Web App
The most significant problem is that there are differences in the answers, which should be enough to make most people go cold at the thought. Since there’s no version control on the cloud-based service, you have absolutely no idea whether the maths that calculated your result today is even the same as the maths it used a month ago; it’s possible for a hosted web application to come up with different numbers each time. Of course, the same might be true of the exact page layout in a word-processing app, but a page-formatting bug is far less likely to prove mission-critical.
I’d like to quote the final paragraph of the report: “Based on the findings, it is our understanding that the developers of cloud-based spreadsheets have not been performing basic quality control and providing sufficient documentation, and that the results of their statistical calculations cannot be trusted. Whether the user can expect the developers to correct these problems is a legitimate concern. Zoho and Google have no track record when it comes to fixing errors in spreadsheets, but the errors they have made demonstrate a complete lack of knowledge concerning the literature on the accuracy of statistical software, in particular spreadsheets. Microsoft has a long track record of failing to fix errors in the PC version of Excel, including Excel 2010 (Knüsel 2011; Mélard 2011). Whether Microsoft can fix errors in its cloud spreadsheet without having fixed errors in its PC spreadsheet we are doubtful. We leave it to the reader to decide whether other calculations performed by cloud-based spreadsheets can be trusted.”
Please read that several times, slowly, then ask yourself how much you’re prepared to trust a cloud provider of spreadsheet services. Should it really be this difficult? You might argue that only some esoteric stats functions are affected here, and that may be so, but there’s nothing to suggest it doesn’t apply to other functions, too. In any case, how would you know? Unlike a desktop app, you can’t roll back to a previous version and double-check. Are you feeling lucky, user?
This is an excerpt from an article published in the July 2013 issue of PC & Tech Authority magazine.
Copyright © PC Pro, Dennis Publishing
Copyright © PC Authority, nextmedia
Tags:
app cloud excel software spreadsheet web
By Jon Honeyball
Jul 15 2013
1:01PM