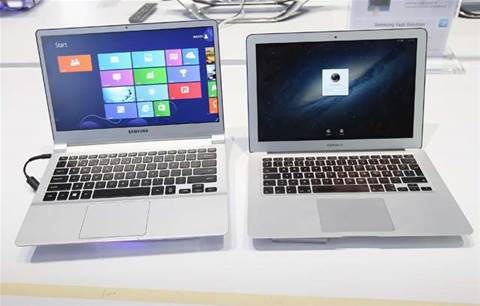 It looks like two Macbooks, but it’s not. Take a look at this photo taken at the IFA electronics trade fair in Germany this week.

Take a look at the photo above - better yet, we’ve put a copy below that you can click to look at in more detail.

It looks like two Macbooks, but it’s not. You’re looking at Windows laptop sitting beside a Macbook. The Mac look-alike is Samsung’s new Notebook Series 9, shown off this week at the IFA electronics trade fair in Germany, where this photo was taken. 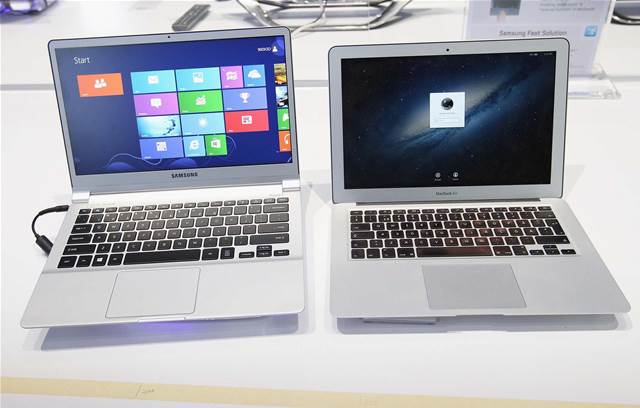 One of these things is not like the other: Click to view in closer detail.
Newsletter Signup

Take a look closely and you’ll notice that even the up/down buttons on the right hand side of the keyboard both have that no-gap design. The hinge is a giveaway, and gap between the screen and the edge of the bezel is slightly different, but at a distance it’s hard to deny there’s a similarity.

The photo just goes to show that on the surface, the Macbook no longer has the monopoly on that clean aluminium look when it comes to laptops. Over the last 12 months it’s gotten a lot easier to find a Windows laptop that looks, well, pretty much like a Mac.

By the way, if the two look so similar, how do you decide between the two?

All-in-one-bodies, backlit keyboards, those “chiclet” style keyboards you see on the Mac, super-light designs, SSD drives, that Mac-like look – you can get all of these things in a Windows laptop now. Last year we looked at a Windows laptop so thin that at one edge it was skinnier than a ballpoint pen lying on its side.

Of course the differences between the two platforms are much more than looks – some people might pick a Mac because of the operating system.

Of course you can run Windows programs on a Macbook – we happened to sit in on a demo today with people from Parallels, who provide software that lets you do that. What’s interesting is that it’s now possible to run the Windows programs you might need for work, like Outlook and Powerpoint, in the Dock, not grouped together in a special sealed-off window.

As we’ve already explained here, this is especially useful if, for example, you are doing your tax returns, as the Australian Taxation Office (ATO) web site and software require Windows.