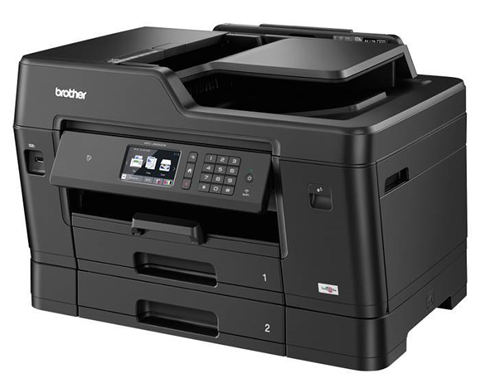 The new range of A3 inkjet all-in-ones is aimed at offices with moderate to heavy print requirements.

To be rolled out between February and April, Brother's seven new models support print volumes of between 250 and 2000 pages a month and use pigment inks in all cartridges for brighter colours and denser blacks.

Optional high-yield cartridges are said to be good for up to 3,000 pages in monochrome and 1,500 pages in colour. Improvements to the print head give an estimated life of 100,000 pages compared with 60,000 for previous models.

Other durability improvements include stronger paper trays and guides.

All models include compatibility with Apple's AirPrint and Brother’s iPrint&Scan apps, and the ability to directly scan to and print from cloud storage services including Dropbox, Google Drive and OneDrive.

The range starts with the $249 MFC-J5330DW which will only be available from Officeworks, and is limited to A4 scanning.

The MFC-J5730DW will be widely available, and while it is broadly similar to the MFC-J5330DW, the price is higher ($369) to pay for the duplex automatic document feeder and a second paper tray.

The $349 MFC-J6530DW is the cheapest model with A3 scanning, but it features a smaller LCD panel than most of the range.

Then there's the MFC-J6730DW, which appears to be the 'Officeworks exclusive' version of the MFC-J6530DW with a second paper tray. It's priced at $369.

The top-end generally available model is the MFC-J6930DW. This $499 unit features two 250-sheet trays, a 100 sheet multi-purpose tray, and includes NFC for ‘tap to print’ from compatible mobile devices and for allowing jobs to be released by presenting a compatible NFC card or badge.

The other two models are only being sold through Brother's reseller network (as opposed to retailers), and so no recommended prices are quoted. The MFC-J5930DW and MFC-J6935DW have similar specifications to the MFC-J5730DW and MFC-J6930DW respectively, but with the addition of a low-paper warning, and PCL5 and BR-Script (PostScript emulation) compatibility.

Brother's all-in-one inkjet range is listed here – we expect the other six new models will be added as they go on sale in the coming months.