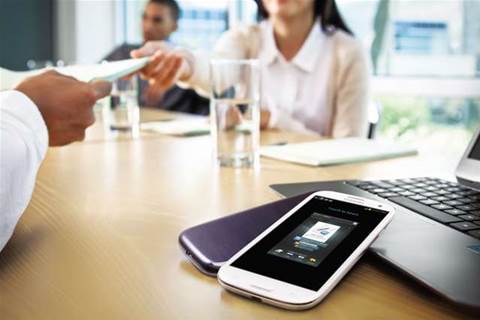 The Galaxy S III delivers plenty of apps for getting work done. Here are the highlights.

Without apps, smartphones are just phones. Palm knew this back in the 90s and Microsoft followed suit with the Pocket PC and Windows Mobile. Apple took the the app business to a new level and Google's Android has learned from that success.

So how does the Samsung Galaxy SIII stack up?

The Galaxy SIII runs Android 4.0.4 - better known as Ice Cream Sandwich. In our view Android is an excellent mobile operating system for mobile workers. The software is easy to use although the learning curve is a little steeper than Apple's iOS. However, there's a lot more flexibility and the ability to add widgets that deliver quick access to information, as well as application icons, makes the homescreen far more powerful.

Core applications like email and calendar work well with Google's GMail and Apps services. However, Google knows that many businesses rely on Microsoft Exchange so there's out of the box support for ActiveSync so you can easily sync email and calendar data.

Even if your business doesn't run its own Exchange server for email, you might be using a service that's hosted by a third party. Either way, the ability to not only access email but also your calendar and make meeting invitations is a very useful feature for mobile workers.

Productivity apps are critical for business people. There's nothing more frustrating than receiving a document that requires a few minor changes but lacking the right tools to do the job. Fortunately, there are plenty of options in the Google Play store. If your needs are simple then there's the free Kingston Office that can work with Dropbox and Google Drive online storage. Otherwise there are plenty of paid options including Docs to Go and Quickoffice (both around $15).

Perhaps the biggest win for the SIII over many of its rivals is the inclusion of Navigon for turn-by-turn navigation. Basic navigation is free for two years with map updates included. The software works well, meaning that there's little need to also own a separate GPS device.

Although Apple's App Store gets a lot of attention, the Google Play store has more than enough apps for either free download or purchase to cover just about every work task you can come up with. In short, the Galaxy SIII delivers plenty of apps for work.