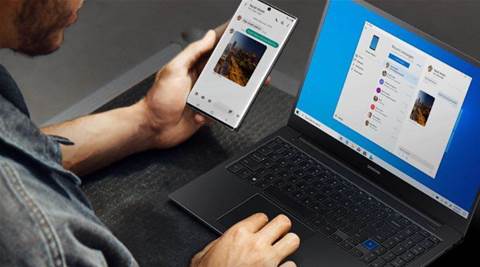 Find out why this flagship phone might be worth looking at.

Samsung is stepping up efforts to make its devices more appealing to business users, including announcing business-friendly features in its new Galaxy Note 10 flagship phone.

With the Galaxy Note 10, Samsung is pushing the concept of “continuity” between the phone and Windows computers. You can plug the phone into your PC via a USB-C to HDMI cable, then drag and drop files between the two devices and control your phone apps on your PC screen using a keyboard and mouse. You could also send and reply to phone messages on your PC screen, for example. This is made possible by the newly improved Samsung DeX feature.

The Galaxy Note 10 also has an “enhanced” Outlook experience. For example, users can hover the phone's S Pen over emails, calendar events and contacts to preview them. And the phone is getting integrated Microsoft OneDrive Cloud storage.

Samsung has also added a feature that turns notes written using the S Pen into Word or PDF files.

There’s also a Galaxy Note 10+ 5G version, which will cost an eye-watering $1,999 and goes on sale at the same time. It’s early days for 5G, but Samsung is expecting interest from business in 5G to grow. Mobile lenders at one of Australia’s “largest banks” are trialing the Galaxy S10 5G with the DeX feature.

And if you’re looking to buy a ruggedised business tablet, keep an eye on Samsung. It is planning to expand its lineup in this category, though it hasn’t revealed details to media yet.