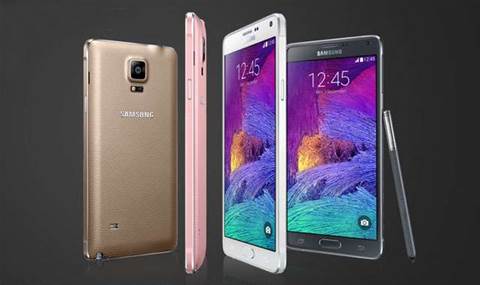 Not everyone likes extremely large phones, but if you do, the new Samsung Galaxy Note 4 might be of interest.

Samsung has announced its new Galaxy Note 4. The 5.7-inch phone/tablet - also sometimes called a phablet - is now available for pre-order through Optus and Vodafone.

The phablet is only available on pre-order as local stock won’t be on hand until 5 November 2014. But if you pre-order now you can get the following deals from Optus and Vodafone.

Optus is offering a special pre-order price of $0 up-front on their $80 My Plan Plus package.

That plan offers unlimited local calls and text and 5GB of data. If you need more data, the $100 plan boosts that to 8GB. Both options are contingent on a 24 month commitment.

If your budget is a little tighter, there are lower cost plans starting at $62 per month but they offer far less bang for buck if you're a reasonably heavy data user.

If you're moving from another carrier, Optus offers a $200 credit to offset any exit fees you might incur and there's also a trade-in offer for your old phone of up to $250.

Vodafone splits out the cost of the handset and their plans for extra clarity. You can add the Galaxy Note 4 to their $70 Red plan for another $10 a month for a total $80 per month with a 24 month commitment.

If you shift to the $80 per month plan, the Galaxy Note 4 is just $6 per month and you get 4GB of data for use in Australia as well as access to their Data Workout for two months. This allows you to use unlimited data for two months while you work out exactly how much data you'll need each month.

That includes infinite standard calls and text within Australia, 300 standard international voice minutes, and 3GB of data. For an extra $5 a day you can also access international roaming if you're a frequent overseas traveller.

There's also a bonus offer of some slick wireless headphones if you pre-order before 4 November 2014.