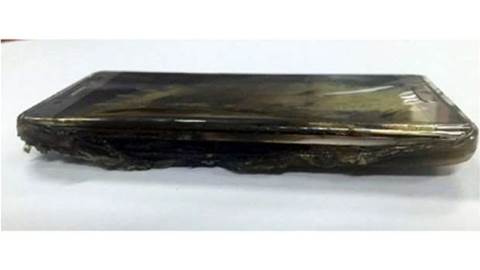 Samsung acknowledges the handset has a 'battery cell issue'.

UPDATE: A Samsung Australia spokesperson said the company had discovered a battery cell issue in the Galaxy Note 7 and indicated a recall was imminent.

The company had earlier stopped sales of the handset following reports of overheating batteries that have led to the phone catching fire.

“In response to recently reported cases of the new Galaxy Note7, we conducted a thorough investigation and found a battery cell issue,” the spokesperson said in a statement.

“To date (as of September 1) there have been 35 cases that have been reported globally. There have no reported incidents in Australia. However, because our customers’ safety is an absolute priority at Samsung, we have stopped sales of the Galaxy Note7.

“For customers who already have Galaxy Note7 devices, we will provide a resolution of their choice including a replacement, repair or refund over the coming weeks.

“We acknowledge the inconvenience this may cause in the market but this is to ensure that Samsung continues to deliver the highest quality products to our customers. We are working closely with our partners to ensure the customer experience is as convenient and efficient as possible. We will have an update for Australian customers early next week.”

Earlier, Samsung said it had delayed the rollout of its Galaxy Note 7 handset to conduct quality tests, following the overheating reports.

The Korean company said in a statement that: “Shipments of the Galaxy Note 7 are being delayed due to additional tests being conducted for product quality.” The company did not expand on the nature or cause of these tests, the scale of the delays, or make any direct connection to local media reports that Note 7's had been exploding.

The announcement does however come amid a series of stories about dangerously overheating batteries, including incidents that occurred last week and earlier this week. In the latter case, Business Korea quoted a user on Korean social network Kakao Story, claiming to be a friend of the phone's owner:

“There was another explosion of the Galaxy Note 7. It was my friend's phone. A Samsung employee checked the site and he is currently in talks over the compensation with Samsung. You should use its original charger just in case and leave the phone far away from where you are while charging.”

Samsung's shares have fallen as a result of the delayed shipment. The company has also faced issues with the production of its handset failing to meet initial demand in some markets, which doesn't exactly put Samsung in the best position a week before rival Apple announces the iPhone 7.

"This is some major buzz-kill for Samsung, especially given all of the hard-earned excitement that products like the Note 7 have been garnering lately," IDC analyst Bryan Ma told Reuters. "The pending Apple launch puts all the more pressure for them to contain this quickly. The timing of this couldn't have been worse."

Hyundai Securities analyst, Jeff Kim, was has taken a more positive outlook, writing in a note that the quality issues could be addressed quickly by replacing modules. “This kind of initial glitch is common for new smartphones,” Kim said, as quoted by the FT. “The supply shortages of the Note 7 would ease within weeks as the problems could be solved by replacing parts and modules and changing the design of circuits.”