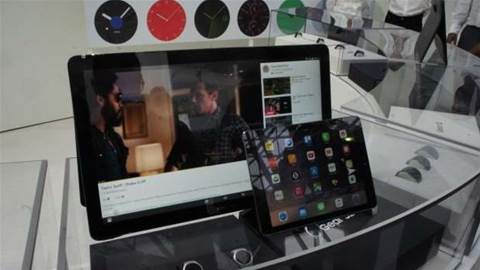 There's a new supersized tablet in town. Last month Apple launched the iPad Pro - its biggest tablet yet - but now Samsung has topped it with the gargantuan, 18in Samsung Galaxy View. It's a big screen, and even bigger gamble.

However, the Galaxy View isn't really competing with the iPad Pro - or any other tablet for that matter - Samsung is gunning for your television instead.

Before we even get into the specs - or why this thing exists at all, it's worth explaining just how big the Galaxy View is. The tablet itself measures 11.9mm x 275.8mm  x 451.8mm, but its screen is the dominating factor. At 18.4” across the diagonal, its Full HD touchscreen is the roughly the size of McDonalds tray - or one and a half foot-long Subways. In non-fast-food terms that's over three times the diagonal dimension of the display on the iPhone 6 Plus and the Samsung S6 Edge+ (or nine times the size of their screens).

It dwarfs other tablets too. The iPad Air 2's screen looks tiny in comparison, and although we haven't put them head to head yet, the Galaxy View also brings a 5.5inch advantage against the Apple's iPad Pro.

But what's that screen for?

Samsung believes there is a space in between the tablet and the TV, and the Galaxy View fills that hole. “We're seeing that time viewing spent on traditional TVs is actually on the decline, and when people even are watching traditional TV, there are other screens in the household using online content,” explained Adam Giles, Samsung's UK Product Manager.  “And we're seeing the growth of online services as well.” 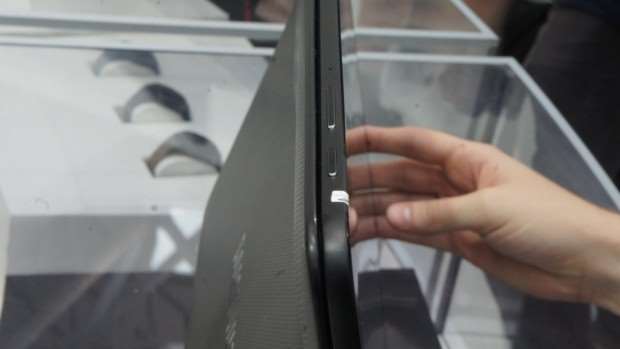 The Galaxy View represents Samsung's response to that gap, and the company believes it gives users all the streaming and portability benefits of a tablet - with something approaching a TV-like screen size. "One of the big frustrations is that they might be watching the sport and then they have to go and do something, or someone comes in demanding the TV-rights,” explained Giles. 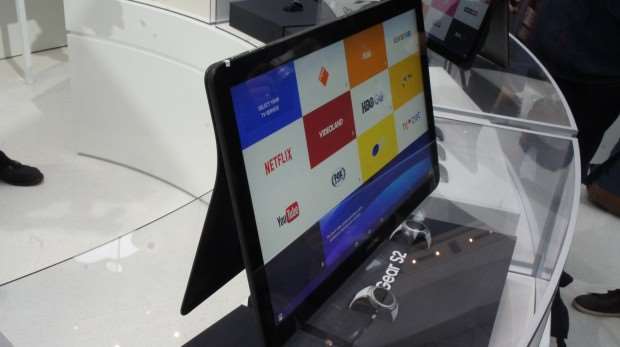 “Well [the Galaxy View] allows you to take that screen, take it to the kitchen and continue to make someone's dinner or take it to the bedroom so you can continue watching your sport in peace - or whatever you want to do."

Samsung has designed a new UI for the device (which runs Android 5.1 Lollipop), purpose-built for its oversized screen. Instead of using normal apps, Samsung wants users to pick their favourite content, and after that the View's UI will deliver it front and centre. Samsung is calling it Family Square.

Although the huge 18.4 screen might be the main draw, the rest of the Galaxy View is also impressive. Samsung has fitted it with a 1.6Ghz octa-core processor along with 2GB of RAM, and it made flicking through the View's bespoke UI a slick experience.

Samsung has given the View 32GB of space, with support for microSD expansion. That initially seems a ridiculously small amount, but it's worth remembering how Samsung thinks this device will be used. The Samsung Galaxy View is designed for streaming and consuming content across your home Wi-Fi network, so users only really need space for photos and streaming apps.

Elsewhere, the View's battery should last long enough for 8.5 hours of video - or 11 episodes of Hell's Kitchen - and it also features features 802.11ac Wi-Fi and Bluetooth 4.1. Although a 4G version of the tablet was hinted at, the View will be available as a Wi-Fi-only device at first. The Galaxy View also throws out sound using two 4 watt front-facing speakers.

In the flesh the View inspires slightly less confidence. As you'd expect, the device is dominated by its screen, and with fairly thin bezels it certainly looks smart.

However, things start to go wrong towards the rear of the device. The back of the Galaxy View is finished with simple textured material, but the build quality of its carrying handle/kickstand. leaves a lot to be desired.

One of the cleverest features of the Galaxy View, the handle allows the device to be carried, but also features two positions for two types of use. In one configuration, you can use it to tilt up the View for tabletop use, while in the other it becomes a kickstand for more TV-like viewing.

To say the stand feels flimsy, however, is an understatement. Although it may be the result of weight saving, it felt of a far lower quality than the rest of the device. Hopefully it's something Samsung will sort before release.

The Galaxy View is certainly a gamble. Samsung has launched itself into the world of larger tablets, but may have come up with a solution to a problem that doesn't exist. Services like Netflix make it easy to switch between your existing devices without missing a second of content, and don't require a carry-around device like the Galaxy View.

What's more, those other devices do a better job in each situation. Smartphones and tablets are more mobile, while connected TV or media streamers allow you to show off content in the living room - on a much bigger screen. Samsung is hoping users prefer carrying around a single screen to firing-up apps on individual devices, but I can't see the benefit.

This isn't the first tablet we've seen either. The HP Envy Rove used a 20in screen, the  Sony Vaio Tap 20 was similarly huge, while Samsung's largest before the View was the 12inch Note Pro.We already know how successful those devices were (not very), so it'll be interesting to see how Samsung fares with the this effort.

Although it's a large tablet, and will be immediately compared to the iPad Pro, the View is a very different product. Rather than productivity, the View is designed purely for content consumption, but Samsung could add more Pro-like features down the line.

Are you convinced? Let us know what you think in the comments section below.

I have read and accept the privacy policy and terms and conditions and by submitting my email address I agree to receive the Business IT newsletter and receive special offers on behalf of Business IT, nextmedia and its valued partners. We will not share your details with third parties.
Copyright © Alphr, Dennis Publishing
Tags:
bigger gambling giles hardware ipad launched samsung samsung galaxy seeing tablet the tablet watching
By a Staff Writer
Nov 2 2015
4:16PM