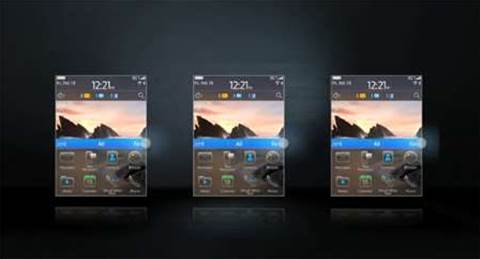 A RIM product manager explained in a blog post that BlackBerry 6 OS will include tools to provide more multimedia functionality in a possible move to compete with the growth of Apple's iPhone in the corporate space.

"In pulling together this update, the multimedia team focused on delivering an intuitive experience right out of the box. So whether you are a power user or new to BlackBerry smartphones, you can easily find and use the enhanced features," the firm said.

Searching for videos will be easier with a new thumbnail view, according to RIM, and the update introduces new ways of playing videos on screen.

"You will be able to opt to play video in various sizes (Original, Fit to Screen, Full Screen), plus instantly share your videos with the world using the new integrated YouTube video uploader," RIM said.

"The new universal search feature in BlackBerry 6 has been designed to enable you to search video sites such as YouTube, and to enjoy higher quality YouTube videos when using Wi-Fi."

RIM also explained that a new podcast service will allow users to search, subscribe and play podcasts directly on a BlackBerry handset. However, while the service will be preloaded in North America, the firm did not mention whether this would be the case in the UK.

The image organiser tool has been updated to allow users to group photos by event or date and add new transitions, and the camera offers several new i mprovements.

"With BlackBerry 6, we focused on perfecting the point-and-shoot experience. Users can capture photos quicker and better than ever before with a variety of new features in BlackBerry 6," the firm said.

"You will be able to access and review camera pictures, set popular options and pick from a variety of scene modes, all directly from the camera screen. You will also be able to capture video using the video camera application on the device."

RIM has lost some of its market dominance in the corporate space to the iPhone in recent months, and the new features could indicate that RIM is keen to win back those who see Apple's option as a better all-round device.

I have read and accept the privacy policy and terms and conditions and by submitting my email address I agree to receive the Business IT newsletter and receive special offers on behalf of Business IT, nextmedia and its valued partners. We will not share your details with third parties.
Copyright ©v3.co.uk
Tags:
blackberry camera multimedia rim software video videos
By Dan Worth
Jul 22 2010
9:32AM