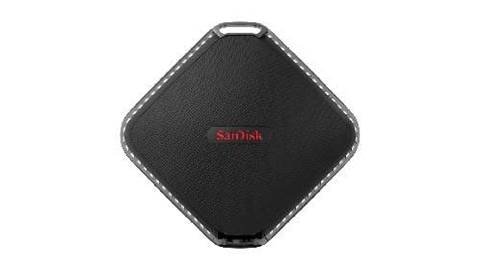 We reported the release of SanDisk's Extreme 500 portable SSD a few months ago, and now we've had the opportunity to try one out.

As we mentioned, the device is about half the size of a smartphone but seems smaller than that in the flesh, and is about the same size and weight as the permanent RFID baggage tags available from Qanats .

While there's a small loop in one corner that would allow it to be added to a keyring, the drive adds more bulk than we think most people would find acceptable. But by adding a metal ring it could easily be clipped onto the keyring holder often found in backpacks and satchels, or attached to a bag loop in a similar way with the aid of a keyring snap hook or a small carabiner.

Being an SSD, it's smaller, lighter and more rugged than a portable hard drive.

So much for portability: what about usage?

SanDisk positions the Extreme 500 as portable storage for photos and videos. The main advantage over thumb drives - even those with USB 3.0 interfaces - is much faster read and write speeds. If you shop around the 120GB model we tested need only cost $40 or so more than one of SanDisk's high-end thumb drives of similar capacity (if you need even more space, it's also available in 240GB and 480GB versions), yet the maximum read speed is four times faster at 415MBps.

The Extreme 500's write speed is up 340MBps, and as the company doesn't publicise the write speeds of its Ultra USB 3.0 flash drives we suspect there's an even bigger difference on that measure.

We chose to compare the Extreme 500 with a generic portable hard drive with a USB 2.0 interface, in part to show how much things have improved in terms of backing up a notebook while you're away from base.

It took nine seconds to transfer a 1GB file to the Extreme 500, and 35 seconds to the generic drive. And that's close enough for us to the "up to 4x faster" claim on the box.

The quicker it is to back up your data, the less likely you are to put off doing it. So whether you are looking for fast portable storage to carry around and perhaps update a large media collection without clogging your notebook's drive, or for a way to back up important data while you're on the move, the Extreme 500 fits the bill.