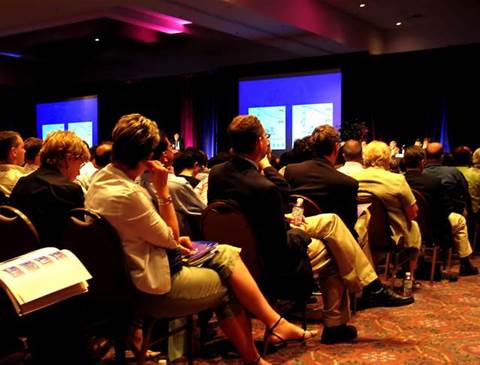 With a federal election looming and Queensland Premier Campbell Newman to give the opening address, the pieces are in place for an interesting event.

You can register for the NAB National Small Business Summit by clicking here. The event will be held on July 24 and 25 at the Brisbane Convention & Exhibition Centre.

What is it all about? We attended last year's Summit in Melbourne. It was a fascinating event - part seminar on doing things like Facebook marketing, part networking event, part opportunity to harangue some senior people in suits on stage (last year's event saw Shadow Minister for Small Business Bruce Billson and Australian Greens Leader Christine Milne in a Q&A with Alan Kohler). Read our coverage here.

This year Minister for Small Business Gary Gray is also scheduled to appear.

Overall, this is very much a big picture event - we'd expect the people who will get the most out of it will be representing business associations and the like.

Last year carbon tax was the issue hovering the background. This year, with an election looming, and various small business groups up in arms over red tape and taxes, it looks like there will be plenty to discuss.

Not to mention that Queensland (this year's Summit is being held in Brisbane) is recovering from flood - a fact organisers haven’t failed to mention.

A press release about the event states that the Summit will give "delegates an opportunity to raise the small business issues in their industries to the government ministers and their representatives for the benefit of policy development."

Meanwhile, a web site has been setup called "Too big to ignore" which encourages small business operators to air their complaints in the lead up to the federal election. Among the complaints - small businesses are "overtaxed, overregulated and overlooked". Click here to read more about the Too Big To Ignore campaign.

Simpifying GST/BAS was also selected as a vote winner by 65% of 1,005 small business people surveyed by MYOB.