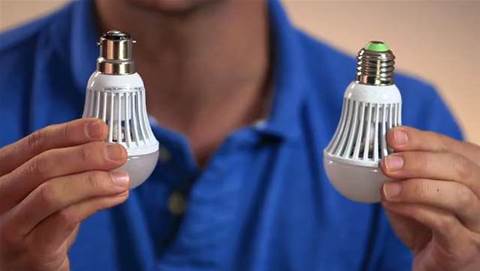 Most offices switched from incandescent to fluorescent lighting years ago, but you may have some rooms where conventional tubes aren't suitable. Enter LED.

Electricity costs keep going up. You can't do much about that, but you do have some say in how much electricity you use.

We recently spotted an advertisement on Australian television for a company called iGlobe that's selling LED globes exclusively online with prices starting at $6.99 for '25W'.
The more commonly used '60W' and '100W' versions cost $15.99 and $19.99, but that's a lot more reasonable than some of the prices we saw last year.
Newsletter Signup

I have read and accept the privacy policy and terms and conditions and by submitting my email address I agree to receive the Business IT newsletter and receive special offers on behalf of Business IT, nextmedia and its valued partners. We will not share your details with third parties.
There's also a 12v downlight to replace existing halogen downlights.
According to the company's calculator, replacing a 100W incandescent lamp with an iGlobe that's switched on for three hours a day saves over $30 per year (at 30c per kWh), so the payback period is within a year.
We haven't dealt with the company (we couldn't find a physical address or phone number on its web site, which may put off some potential customers: one of the tips for safe online shopping given by Queensland's Office of Fair Trading is "Check that the company has a physical address and phone number") or tested the globes, so just treat this as an example of what's on the market.
LED vs Fluorescent lights
Most offices switched from incandescent to fluorescent lighting years ago, but you may have some rooms where conventional tubes aren't suitable. It's a particular issue for home offices.
Compact fluorescent lamps (CFLs) can be used as replacements for old-school globes (which are now unavailable) in many fittings, but they're not always ideal.
In particular, frequent power cycling reduces the life of CFLs, so you may see suggestions that it's better to leave them on for at least 15 minutes at a time.
That means they aren't really suitable for storerooms and lavatories - unless you have an employee like Dilbert's colleague Wally.
LED globes, on the other hand, give full brightness immediately, and their lifespan is not affected by being frequently turned on or off.
They also use very little power: a '60W equivalent' CFL might draw 13W, but a similar LED globe can consume as little as 5.5W.
That's a good job, because LED globes are still reasonably expensive.
Copyright © BIT (Business IT). All rights reserved.
Tags:
bulb cfl fluorescent hardware iglobe led light which
By Daniel James
Jan 10 2013
4:28PM