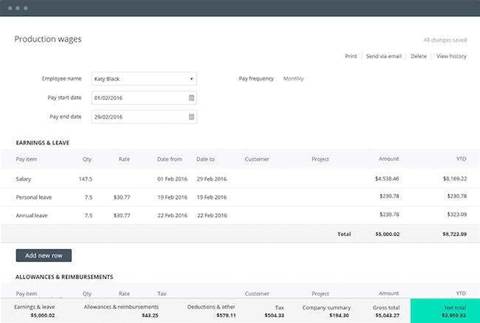 Reckon finally adds a payroll module to the Australian cloud accounting system, with pricing starting at $3 a month for unlimited employees.

Reckon One hit the market about a year ago but it lacked payroll functionality. That gap has now been filled with the long-awaited release of its payroll module.

"The lack of payroll functionality was curbing the uptake of Reckon One," admitted Clive Rabie, Reckon's CEO.

Pricing for Reckon One's payroll module starts at $3 per month for an unlimited number of employees. It includes superannuation calculations, attendance and leave tracking, and offers manual or scheduled pay runs.

Changes to tax tables, superannuation guarantee rates and other levies are automatically updated. If the Reckon One projects module is also used, pay items can be allocated to projects.

The basic module will include the ability to download a SAFF (SuperStream Alternative File Format) files from 30 June 2016, but for an extra $2 per month the module will also lodge it automatically via NAB SuperPay.

Unlike some other cloud accounting systems, Reckon One allows users to select just the modules they need, and it's not necessary to buy extra functions just to lift any capacity restraints. For example, the $3 payroll module allows for an unlimited number of employees, whereas with Xero if you go from one employee to six, you may be forced from the $25 plan to the $70 plan, which also lifts the limits on invoices, bills and bank transactions as well as adding multi-currency support (those Xero prices apply from 2 June 2016).

Pricing for the Reckon One core module starts at $5 per month, with other modules, including invoicing, projects, and time and expenses, each starting at $3 per month. Additionally, pricing for automatic bank feeds starts at $3 per month for up to 100 transactions.

Another point of difference from some competitors is that Reckon didn’t acquire its payroll software but built it "from the ground up", Rabie said.

With the company set to launch Reckon One in the UK in the near future, Rabie commented: "We will prove that an Australian company based in North Sydney can battle with the best of them and win on the world stage."