Quitting the cubicle farm for coworking 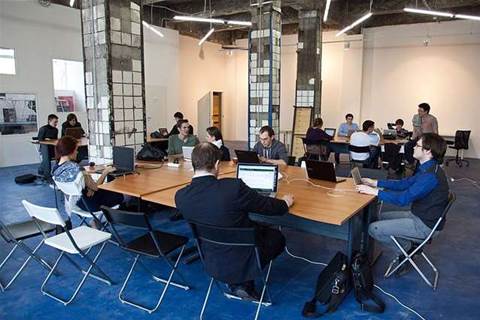 From humble beginnings, the coworking movement has exploded to an estimated 3000 spaces around the world.

From humble beginnings, the coworking movement has exploded to an estimated 3000 spaces around the world, with hundreds of thousands of people choosing to ditch the home or corporate office in favour of a shared workspace.

Coworking spaces offer sanctuary and solidarity to those escaping the isolation of working at home, and those in search of an alternative to the grind of the office or cubicle farm. The “co” in coworking might possibly be “community”.

Bernie DeKoven is credited with coining the term “coworking” back in 1999 to describe an emerging pattern of people choosing to work on their own projects but in shared physical proximity. As is often the case with zeitgeist “inventions”, several parallel examples of the idea appeared at the same time. Early reports depict coworking as becoming both a recognised social movement and growing form of enterprise.

San Francisco, 2005: Brad Neuberg was facing the dilemma of choosing between the “structure and community” of a nine to five job and the “freedom and independence” of contract work. He opted for the “both-and” option (a phrase in itself that has become emblematic of coworking philosophy). Brad opened one of the first recognised coworking spaces. In his own words:

“I grew up in Texas and it was like a desert. There was no community, no connection. I was like the only geek… so to have a coworking space, that could be really powerful.”

London, the same year: A small group of social entrepreneurs led by Jonathan Robinson opened the first “Hub” on the top floor of an old warehouse in Islington. Their vision was for a new work space structured around serendipitous encounters between “unlikely allies for a radically better world”. The model aimed to meld together the best of a business incubator, think tank, learning lab and a professional membership community.

“We discovered this whole set of people trying to realise good ideas from their bedrooms; lonely, cut off from the world, not really fulfilling the potential of their ideas. So it dawned on us: what if these people could come together in the same physical space and have a place to connect?”

For fans, coworking offers something missing from the home office and lost in the daily grind. And people are drawn to its collaborative potential. Its growth signals this.

The dedicated online coworking magazine Deskmag this year claimed 100,000 people coworked; and a new “space” is estimated to open each day somewhere in the world.

In Australia there are over 60 coworking spaces in operation, and the country boasts both the highest density per capita and, with the majority of spaces opening over the past two years, one of the highest growth rates. While the majority of coworking spaces tend to be single location, founder-owner operated and close to the CBD, we are starting to see forays into regional and suburban areas.

It’s ironic that at the very moment many white collar workers are able and have chosen to “live the dream” of working from home, a model has sprung up to cater to an unmet social need emerging as people spend less time communicating face-to-face. Twenty years after Robert Putnam published Bowling Alone we see the development and growth of a service offering a communal experience akin to a bygone utopia of “village life” amid the competition and anonymity of the CBDs of major cities. The curiosity of coworking, as Clay Spinuzzi puts it, is in people’s desire to be “working alone together”.

But despite the rapid growth rates estimated above, just a small proportion of workers in the economy are engaged in coworking. Indeed, few have the luxury to choose to.

Emotionally, coworking doesn’t necessarily feel right for everyone. The prospect of sharing work spaces with people from other organisations, and the general buzz of the place doesn’t appeal to all. Coworking spaces are unfamiliar to those accustomed to conventional workplaces. Likewise, coworking’s constant stream of activity can be a distraction to those who prefer the silence and stillness of working alone.

Socially, individuals are attracted by the promise of professional connections and a supportive community but, for a variety of reasons, not all are able to realise their promised value and end up leaving. Meanwhile, for large organisations which aim to leverage the innovative potential of coworking by sending their people in, the pull of “community” and the tales of its members can initiate talent drains. People seeking alternatives to the cubicle farm begin easing their transition from employee to free agent.

Is coworking simply a peripheral social movement that will remain at the edge of the mainstream economy, or does it signal the beginning of a wider structural transformation and convergence in the place of work and social engagement?

One argument is that the existing management and institutional models are fundamentally broken. In The Power of Pull, the authors claim the source and means of value creation is shifting away from knowledge stocks towards flows and as a result the basis of competition is fundamentally changing.

Most organisational structures are framed around protecting existing stocks of knowledge rather than participating in knowledge flows and the creation of new knowledge.

Their suggested remedy for this structural malaise is institutional innovation - not simply conceiving of new approaches within existing organisations but rethinking the relationships between and across many varied independent enterprises. From their perspective larger organisations need to seek out and participate in “creation spaces”, such as those found in coworking, where physical and digital environments whose diversity and density offer fertile ground for the “unlikely creative collisions” that breed new ideas.

It’s still too early to determine coworking’s wider social and economic impact, or whether it represents a future of work that will be widely embraced. What is clear now though is that as a social movement and institutional form it is showing no sign of slowing down.

Julian Waters-Lynch is a former employee of Hub Australia.

Tim Butcher is a member of Hub Melbourne.