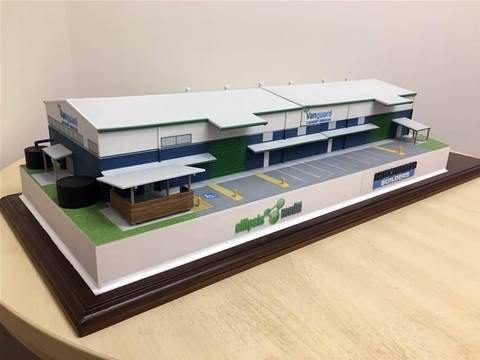 3D printing is capable of some impressive things – such as the 3D-printed rib cage recently implanted in an American patient (thanks in part to CSIRO technology) and the 3D-printed parts in the Boeing 787 Dreamliner – but improvements in the technology have also brought increased sophistication within reach of smaller businesses.

For example, the University of Southern Queensland's print and design company Ellipsis Media has won a gold medal for 3D printing at the 2017 Queensland Print Industry Craftsmanship Awards.

The prize-winning job was an architectural model of the Vanguard Laundry for client Hutchinson Builders, as designed by CKD Architects.

“The model was presented by Hutchinson Builders to the board of the Vanguard Laundry in commemoration of the official launch in January 2017.”

But don't think this sort of quality comes easily.

“This award is the culmination of three years of research and development focused on mastering the capability of full colour, binder jet 3D Printing,” Keanalley said.

Binder jetting involves depositing a thin layer of powdered material and then using inkjet-style technology to spray binder (think of it as a glue) onto the areas that are to become part of the finished object. Another layer of powder is added, and the process continues.

Full colour objects can be created by adding dye along with the binder.

“This has incredible application in architecture, archaeology, medical education, prototyping and personalised or customised promotional and marketing fields,” he added.