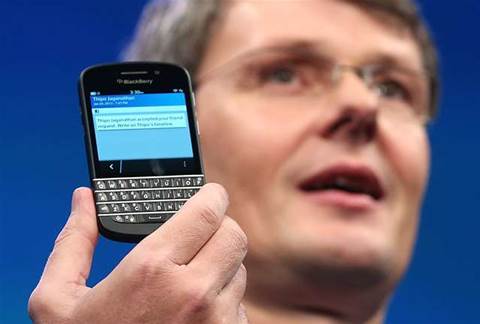 If you're one of the few that's failed to find touchscreen phones easy to use, you might be interested to know BlackBerry has unveiled a new keyboard-phone.

Overnight Blackberry announced two new phones:
Decent phones with physical keyboards are getting hard to find, so it's good news if you're a longtime BlackBerry user, you do a lot of emailing and typing on your phone, and you prefer a keyboard.
Newsletter Signup

I have read and accept the privacy policy and terms and conditions and by submitting my email address I agree to receive the Business IT newsletter and receive special offers on behalf of Business IT, nextmedia and its valued partners. We will not share your details with third parties.
The Blackberry Q10
The Blackberry Q10 will make its worldwide debut beginning in April. It, and the bigger brother the Z10, both have 1.5 GHz dual core processors, 2GB of RAM, 16GB of internal storage, a memory card slot, NFC (for wireless "tap and go" payments) and a micro HDMI out port for connecting to a big screen (handy for showing presentations).
As we've said before, it doesn't matter how good the specs are if the phone isn't easy to use. These two new phones have the new BlackBerry 10 operating system.
Key features include a "Flow" method of swiping between apps - the idea is you swipe between apps, instead of constantly opening new apps.
"Balance" is a feature which allows you to keep your personal and work information separate.
There are 70,000 BlackBerry 10 apps.
While there is a trend towards bigger screens in top-of-the-line smartphones, the Blackberry Q10 screen is noticeably smaller, with a 3.1in screen.
[UPDATE: we should also point out that the Q10 is tipped to come with 4G/LTE, though we're yet to know whether that will include Q!0 phones sold in Australia.]
When can I buy it?
The Blackberry Q10 will make its worldwide debut beginning in April. Australian pricing and an exact sale date haven't been announced at time of writing.
As for the Z10, local pricing and availability hasn't been announced yet either, but a local BlackBerry spokesperson has confirmed that Optus and Telstra will offer the Z10 in Australia.
Since the company announced availability in the UK, Canada and the UAE over the next couple of weeks and in the US in March, we expect that we'll be waiting longer than that.
Copyright © BIT (Business IT). All rights reserved.
Tags:
australia blackberry hardware keyboard launch phones q10 z10
By Daniel James
Jan 31 2013
11:38AM