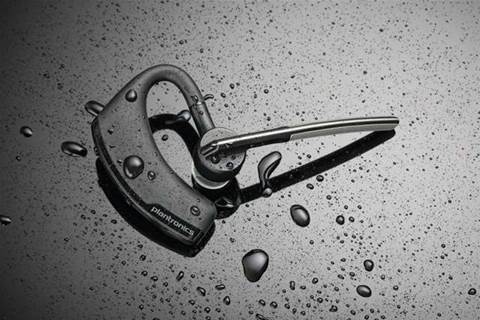 The headset company claims its new Voyager goes "beyond any other product on the market today."

Let's get this out of the way - not everyone is comfortable wearing Bluetooth headsets.

We asked a few people in our office, and they said they'd be comfortable wearing them at work, or driving, but more often than not they indicated they'd be a bit squeamish popping a headset on while walking down the street.

But if you're a delivery driver, someone who does a lot of phone conversation in and out of taxis and public transport, or you just don't want to have to constantly hold your phone, Bluetooth headsets are potentially quite a handy gadget to own.

Plantronics is a well-known name in this area, and they've unveiled what is their crem de la crème of Bluetooth headsets - the Voyager Legend.

On-sale at Officeworks from $129 and other retailers at a later date, one of the Voyager's main selling points is better noise-cancelling, meaning your voice should sound clearer and louder to the person at the other end, compared to a regular phone conversation, if you're in a windy or noisy crowd situation.

The Voyager is also built a bit tougher than cheaper headsets, with water repellent film, meaning in theory it can handle a sweaty building site or deliveries in the rain.

Another feature we like the sound of is that the handset can tell you who's calling (if it's a recognised caller) as well as how many hours of battery life you have left - and the system can do this in several languages. The headset is rated for seven hours talk time.

Unlike the in-ear variety of headsests, the Voyager's over-ear style should in theory mean it's more comfortable if you're wearing it for hours at a time.

Answer a call on your phone, then pickup the Voyager Legend and place it on your ear, and it will automatically switch the audio to your earpiece, without you having to go fiddling in your phone's settings.