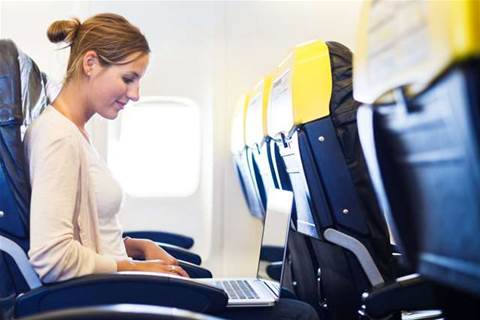 Next time you're flying, why not take the captain's advice and sit back, relax, and enjoy the in-flight service.

Many people probably shrugged their shoulders when they heard the news that Qantas had wound up its trial of in-flight internet access but a few were likely disappointed.
The main demand for in-flight access seems to come from social networking addicts, people who get a lot of email, and news junkies.
Newsletter Signup

I have read and accept the privacy policy and terms and conditions and by submitting my email address I agree to receive the Business IT newsletter and receive special offers on behalf of Business IT, nextmedia and its valued partners. We will not share your details with third parties.
But for the rest of us, the need for a little advance preparation is a small price to pay for the lack of interruptions as a result of being disconnected for several hours.
Make sure you all the documents you may need are on your laptop, tablet or smartphone. If you use Dropbox or similar, sync the device you're carrying before you leave or at the airport.
Much the same applies to email: sync your inbox as close as possible to flight time, then you can read and reply on the plane, and sync again on arrival.
Knowing there are going to be at least 100 new messages waiting for you could increase the stress of travelling, and I can understand why some people would prefer to deal with them in flight, especially if their employer was picking up the tab - as with hotels, in-flight internet usually comes at a significant though arguably not prohibitive price.
If nothing else, being able to use a little time in the air to clear your inbox of any new messages that don't really need your attention can reduce this source of stress.
If you're a sole trader and your customers are used to being able to reach you via Twitter or another social network, then a longer delay than usual might bother them.
But if you're travelling to a significantly different time zone, you're unlikely to be online during your usual hours during the trip anyway, so how much difference do you think it will make if you're out of contact for the duration of the flight?
Some people say they like to use in-flight internet access to research their destination. To me, that sounds like a failure to plan.
Or perhaps the way they look at it is that the probability of actually reaching the intended destination only reaches a critical level once they've taken off, and any investigation before that involves too big a risk of wasting time.
The one group I do have some sympathy for is small business operators who haven't reached the scale of operations where it's 'business as usual' in their absence.
Being out of contact for as much as 15 hours on a working day could be stressful in these circumstances, but it's only recently that travellers have had any real expectation of in-flight connectivity. So even this seems to fall into category of 'first world problems'.
Still, those who really are desperate to keep in touch on a long-haul Qantas flight can resort to the in-seat phone to make calls at US$5 per minute or to send or receive text messages at US$1.90 each.
A closing thought: employees often find that business travel arrangements eat into their own time (most of my overseas trips seem to involve losing either a Saturday or a Sunday, and domestic travel usually means leaving home significantly earlier than usual or getting back around bedtime, or sometimes both), and most self-employed people seem to work excessive hours anyway.
So next time you're flying, why not take the captain's advice and "sit back, relax, and enjoy our in-flight service"?
Copyright © BIT (Business IT). All rights reserved.
Tags:
plane qantas wifi
By Daniel James
Dec 3 2012
4:33PM