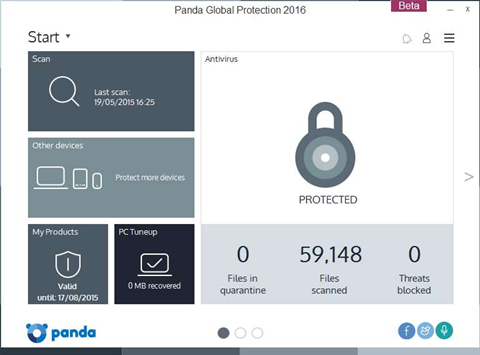 Panda Security has announced the first public beta of Panda Global Protection 2016, a revamp of its comprehensive all-round security suite.

Who needs an eye-catching interface, anyway?

The package now also runs on anything from Windows XP through to Windows 10, both 32 and 64-bit editions.

Our first impressions weren’t great. Why is the previously colourful, eye-catching interface now so dull and drab? (We're guessing it's to match Windows 10's new under-the-hood look.)  Why did the scanner say it had detected and fixed one threat, but the logs not tell us what that was? And why did the PC Tuneup module lock up every time we scanned our test computer? We’ve absolutely no idea.

Still, the suite may be interesting if you’re a Panda fan, and if you’re one of the top beta testers then there are various prizes to be won, including 1 of 600 Euros (as in, one prize worth 600 Euros, not one-out-of-the-600 Euros in the prize... neverm ind), 9 of 200 Euros, and 250 1-year, 5-device subscriptions to the finished product.