Outlook for Android comes out of preview 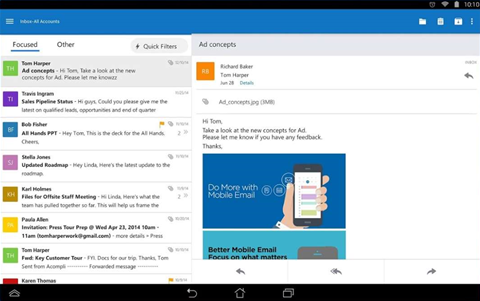 Microsoft has dropped the “preview” tag from its free Outlook for Android app (at last!), following a host of recent updates and improvements.

The interface has received a colorful revamp, and been redesigned to better follow Android design principles.

A far more capable People section displays all contacts from all your email accounts. Select someone and you’re able to launch a new email or start a phone call with a tap. Which is good news, although we’re more surprised that you weren’t able to do this before.

A three-day Calendar view shows more of your schedule, while a “remove from calendar” action makes it easier to revise your plans later.

You can now customise the left or right swipes to delete, move, archive, flag, mark as read/unread or schedule a message: whatever works for you.

Other additions include Global Address List searching and the ability to permanently delete items from the deleted items folder, which apparently “was one of our top requested features from users” (and something else which really should have been there all along).

Microsoft’s Outlook app is still relatively basic and scores only 3.5/5 at Google Play right now, but it’s been receiving plenty of updates recently and we’re still optimistic about its prospects.