Outlinely Express is a powerful free outliner for Mac 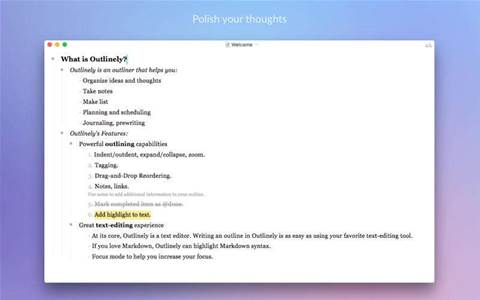 Outlines are great for organising long or complex lists, reports or articles. Wordprocessors like Microsoft Word often have an outline mode, but they don’t have the powerful features offered by Glam Software's Outlinely.

Outlinely Express 2.0 has all the same features as its commercial cousin, with no annoying restrictions or limitations. You don’t get the full version’s library management features – new tools for storing and organising your outlines – but the program is very usable without them.

And arguably Outlinely Express 2.0 is better than regular Outlinely 1.x, as it has a much-improved interface and many new shortcuts and productivity tweaks.

If you’re new to Outlinely, it’s essentially a text editor optimised for outlining. You already know how to use the core features, entering text, changing font and styles, search and replace, undo/ redo, and more.

But the program builds on this with many outliner-oriented features, like creating lists within lists, dragging and dropping to reorganise them, attaching notes and links, adding checklists with checkboxes, zooming in to any item, collapsing and expanding to hide/ remove detail, and more.

Your outline may then be exported to PDF, Microsoft Word, RTF, HTML and plain-text formats. It also exports to OPML (Outline Processor Markup Language), an XML format for outlines, and Markdown, a format that is increasingly used for updating websites.