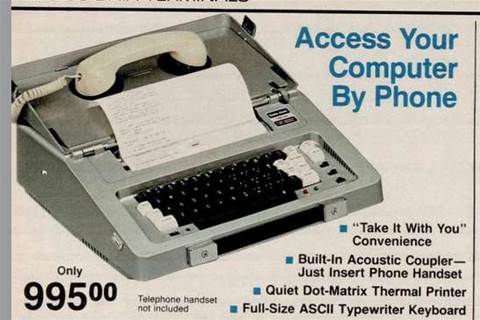 Yes, this portable "data terminal" really did require sheets of paper, like a fax machine.

I have read and accept the privacy policy and terms and conditions and by submitting my email address I agree to receive the Business IT newsletter and receive special offers on behalf of Business IT, nextmedia and its valued partners. We will not share your details with third parties.
To access them 'on the road', you needed a terminal such as the TI Silent 700 or the somewhat less stylish Radio Shack PT-210, which we spotted thanks to the site BoingBoing.
One important difference was that instead of communicating via the internet, mobile users would normally dial directly into a specific service. Thus, the phone handset pushed into a pair of rubber cups.
And yes, it really did use a thermal printer much like a traditional fax machine did, so if you ran out of paper on a trip, work would grind to a halt until you found a store that stocked the correct sized rolls.
Furthermore, the printouts were a long way from archive quality and exposure to heat such as being left inside a car on a hot day could leave them largely illegible.
Adjusted for inflation, $US995 in 1983 dollars is more enough to buy a 2.3GHz, 15in MacBook Pro with Retina display.
Maybe they weren't the good old days after all...
Here are two other interesting portable computers from decades past:
Copyright © BIT (Business IT). All rights reserved.
Tags:
hardware vintage
By Daniel James
Dec 10 2012
4:09PM