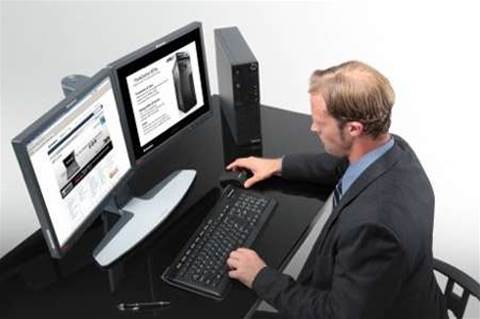 Are your office desktop PCs past their prime? Lenovo has added a dose of grunt to its mainstream business desktop lineup, as well as an AMD option

Business PCs are a curious mix of often relatively limited performance (including the odd Pentium), management and backup tools, sometimes tool-less case design, and in the case of enterprise PCs, stable system images and extensive repair and return policies.

The last ThinkCentre we reviewed that really blew us away was the Lenovo ThinkCentre A58, which impressed us so much it made our A-List with its 2.75GHz Intel Pentium Dual Core E5400, at a price of $1117.

By contrast, Lenovo's latest addition to the M Series ThinkCentre range, the M80, is an altogether entirely different beast - not least due to the option of Core i7 chip (i7-870). This marks the M80 as a distinctly powerful choice for office tasks. There's also Core i3 and i5 options for those not so worried about CPU bragging rights. The machine goes on sale November 4.

We're waiting on Australian pricing information from Lenovo, but expect this to be a pricier option than Lenovo's other new office desktop, the M75e. This is the first M Series with an AMD processor (Athlon II or Phenom II, though US specs show a Sempron option at the entry level). Lenovo is claiming a boot time of about 30 seconds, and the ability to drive four displays. The M75e goes on sale November 30.

We're still waiting on spec details and pricing, but we note that in the US, the M75e base configuration includes a Sempron chip, 2GB memory and 250GB HDD.

A couple of other features stood out, one being the a "hard drive retention" tool which lets users keep their hard disks after their PC is no longer used. For those businesses that have never given a second thought to a security policy for end-of-life machines, this might be useful.

If an all-in-one PC doesn't float your boat, or a touchscreen PC (oh yes, even office workers haven’t escaped the relentless effort to popularise the touchscreen PC), then perhaps the dual-display capability of the M75e will. All your boss need to know is that it's good for productivity.